So far there's no evidence of "widespread deficiencies" in the "rigid K-frame superstructure types," the report says.
AP
By MARK SCOLFORO Associated Press 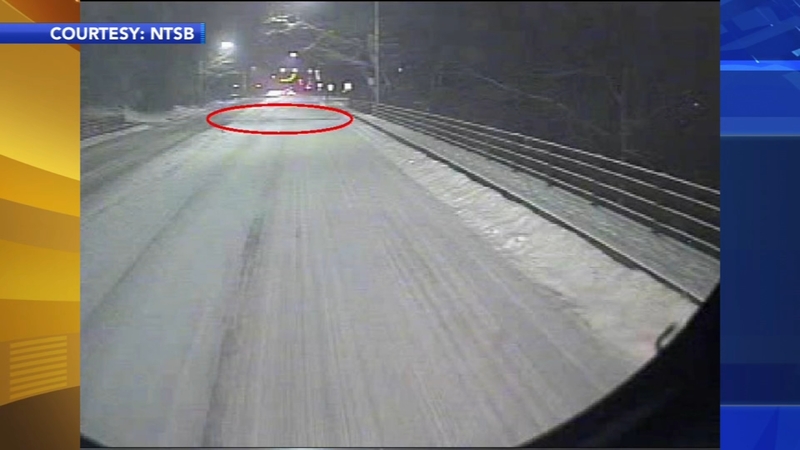 HARRISBURG, Pennsylvania -- Video footage from a bus of the bridge collapse in Pittsburgh this year shows one end of the structure had already fallen when an expansion joint at the other end was pulling apart, federal investigators said Thursday.

The National Transportation Safety Board issued an update on the Fern Hollow bridge collapse, saying the video is giving them more information about the sequence of events.

So far there's no evidence of "widespread deficiencies" in the "rigid K-frame superstructure types" that form the bridge's basic structure, the report said.

The investigative update said that all aspects of the disaster are still being looked at and that the cause has yet to be determined. Investigators plan mechanical and chemical testing on material samples and will examine plate dimensions and weld quality.

A preliminary report issued less than two weeks after the Jan. 28 collapse had found the collapse began at the structure's west end and noted there had been no primary fractures in sections of welded steel girders considered "fracture critical." A fracture critical area in a beam is the part most likely to show damage if the bridge has suddenly given way.

When the Forbes Avenue bridge gave way, it sent a city bus and four passenger cars down some 100 feet (30 meters) to a ravine carved by Fern Hollow Creek. Another vehicle drove off the east bridge abutment and landed on its roof.

Although the preliminary report had said a total of 10 vehicle occupants had been injured, the agency has now concluded that there were nine people in six vehicles. Two were injured seriously, two had minor injuries, four were not hurt, and the injury status of one person is uncertain, the agency said Thursday. No one was killed.

Natural gas lines ruptured and required the evacuation of nearby homes.

The 447-foot-long (136-meter) bridge, about 50 years old, showed some deterioration during an inspection in September, but not enough to require its closure. The bridge has had a 26-ton (24,000 kilogram) weight limit since 2014.

The future of the bridge is the topic of a virtual meeting Thursday night in which city officials and neighbors are expected to participate.

The Pennsylvania Department of Transportation has said up to $25.3 million in National Highway Performance Program funds is being used to rebuild the structure. The contractor began gearing up for construction last month, and early foundation work is about to begin, PennDOT spokesperson Alexis Campbell said Thursday.