Gordon Lake (left), Manuel Santos and their daughter Carmen pose in embroidered Thai-style clothes given to them by supporters. (twogaypapas/Instagram)

A little girl with a large online following and ties to the U.S. may soon get to go home with her fathers after a 15-month legal battle involving her surrogate mother.

New Jersey native Gordon "Bud" Lake and his husband, Spaniard Manuel Santos, came to Thailand in January 2015 for the birth of their daughter, Carmen. When the surrogate found out Carmen's parents were gay, she decided she wanted to keep the baby.

Carmen has been in Thailand ever since, but that could soon change. On Tuesday, Bangkok's Juvenile and Family Court ruled that Lake, who is Carmen's biological father, is her legal guardian, his lawyer told the Associated Press. Surrogate mother Patidta Kusolsang, who is not the girl's biological mother, was not in court and it is not known whether she intends to appeal the decision. 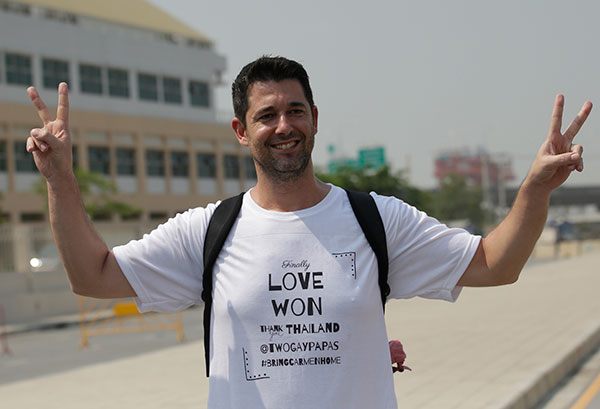 "We are obviously very happy with the ruling, but at the same time it is all so surreal," Lake told ABC. "It's unfortunate, but living under these extremely undesirable circumstances has become the norm for us."

A new law in Thailand, which took effect after Carmen was born, banned commercial surrogacy, causing the surrogacy agency the family was using to be shut down. There was a grace period for babies like Carmen, but Thai law does not recognize same-sex marriages, complicating the case. 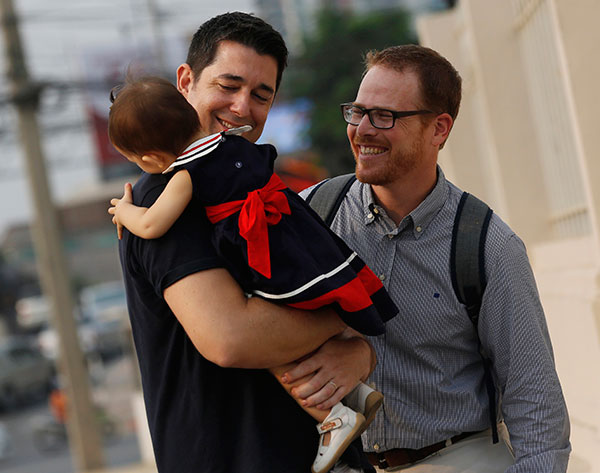 In this March 23 file photo, American Gordon Lake, right, and Spaniard Manuel Santos, left, walk with their baby Carmen at the Central Juvenile and Family Court in Bangkok.

Carmen's case gained attention online under a campaign her fathers started called "Bring Carmen Home." The community now has more than 100,000 followers on Facebook keeping up with the family's day-to-day lives and the progress of the legal battle.

The family tried their best to maintain a sense of normalcy, Lake told ABC in July 2015, sending their toddler, Alvaro, to a Thai daycare. Both men had to work remotely, though, and the paperwork and meetings involved in the lengthy legal battle took up much of their time.

"We have tried to keep calm and address each issue one after another and provide a safe and comfortable home for our children," Lake said at the time. "And the happiness that they both bring to us has really helped us keep centered and get through this."

Following the court's decision, Lake said they are preparing to leave Thailand. Carmen is a U.S. citizen like Lake, but the family now calls Spain home.

Read more about Carmen and her family on their Facebook page.