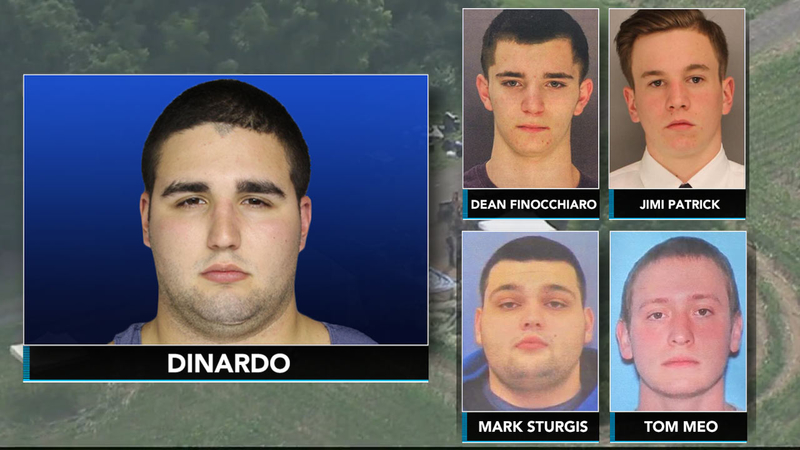 The gruesome murders for four young men in Bucks County will be the subject of a true-crime cable series.

Investigation Discovery, which has featured Philadelphia crime in its "Homicide City" series, will premiere "The Lost Boys of Bucks County" in 2020.

Cosmo DiNardo and his cousin Sean Kratz were charged in the July 2017 killings of Dean Finocchiaro, 19, of Middletown Twp.; Mark Sturgis, 22, of Pennsburg; Tom Meo, 21, of Plumstead; and Jimi Patrick, 19, of Newtown.

Remains of all four men were found at a farm owned by DiNardo's family.

Watch Chopper 6 video where police have returned to the Dinardo property.

DiNardo was sentenced last year to four consecutive life sentences for the murders.

The special will be told through the perspective of Middletown, Pa. police officer Megan Freer.

"Blue blood born-and-bred Megan Freer is new to the force, but what she lacks in experience she makes up for in instinct and not only a connection to the area, but also to the families of some of the lost boys that further fuels her passion for justice. In the face of great evil, Freer is thrust into a dark and twisted path, forced to follow her intuition to put together the pieces hiding in plain sight that bring a brutal serial killer to justice," the network description reads.

Here is a timeline of events during that week in July 2017:

The disappearance of four local men has been at the center of a massive search in Bucks County.

-Thomas Meo's girlfriend receives her last text message from him.

-Mark Sturgis, a good friend and co-worker of Meo, is last seen. Investigators say he told his father he was going to meet Meo.

-A license plate reader on Street Road in Solebury Township captures a pickup truck belonging to 20-year-old Cosmo DiNardo of Bensalem. The location is near a property on Aquetong Road, which is owned by the DiNardo family.

-A few seconds later, a Nissan Maxima owned by Meo is captured by the license plate reader.

-Meo and Sturgis fail to report to work.

-Meo's mother calls police to report him missing.
-A friend says DiNardo tried to sell him a Nissan for $500; investigators allege it is Meo's vehicle.

-Sturgis' vehicle is located in the area of Peddler's Village.

-Meo's Nissan Maxima is found at a property owned by the DiNardo family in the 2800 block of Aquetong Road.

-The location is near the license plate reader that captured Meo and DiNardo's vehicles, and also near Peddler's Village.

-Police say a search of the property revealed the keys and title of the vehicle. Investigators say the title was not signed by Meo, indicating no legal transfer of ownership.

-Diabetic supplies, believed to be Meo's, are also found in the vehicle. Meo would not willingly leave those supplies behind, the family tells investigators.

-DiNardo tells detectives he was driving a silver 2016 Ford pickup on the night of July 7, with the same tag that was picked up by the license plate reader.

-Police begin to focus their search on farmland owned by the DiNardo family on Upper Mountain Road near Route 202 in Solebury Twp.

-Cosmo DiNardo is arrested on a weapons offense from February. His bail is set at 10 percent of $1 million.

-The Bucks County District Attorney Matthew Weintraub calls DiNardo a "person of interest" in the case.
-Weintraub says he believes "foul play" is involved in the disappearances.

-DiNardo is released after posting bail.

-Weintraub announces that investigators have found 'important' evidence, but does not elaborate.

-DiNardo is arrested again, this time on charges he stole Meo's vehicle.

-Bail for DiNardo is set at $5 million cash. The judge says it's the highest bail she's ever set.

-At a midnight news conference, Weintraub announces that human remains were found.

-Among those remains are those of Dean Finocchiaro.