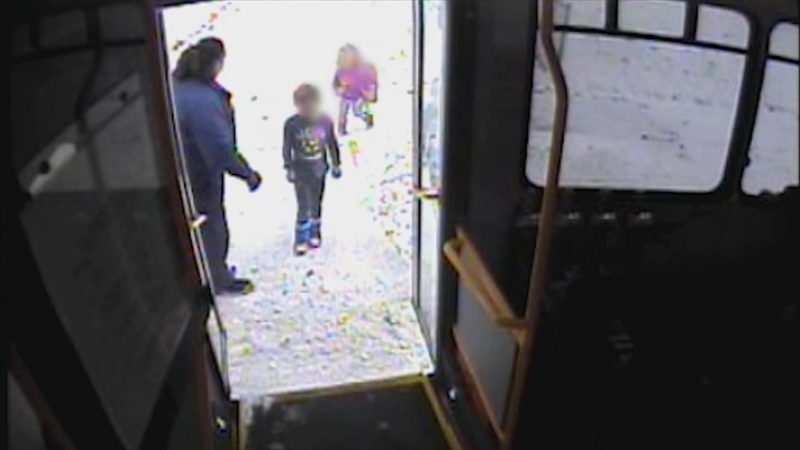 WAUKESHA, Wis. -- A Wisconsin bus driver is being hailed as a hero after she rescued two siblings found wandering in the snow Monday morning.

Nicole Chamberlain said she found a 6-year-old boy and his 2-year-old sister in Waukesha, not properly dressed for the cold. At the time the temperature was 18 degrees, WISN reported.

The girl was only wearing a T-shirt, boots and her diaper.

"Neither one of them had a coat on and they were headed towards a busy intersection, and I knew there was no school bus stop down there or a school, so I knew right away I had to pull over and help them," Chamberlain said.

Bus surveillance video shows Chamberlain scoop up the girl and put the two on the bus for warmth. Chamberlain wrapped her coat around the girl.

"I said, 'What's going on?' and they said, 'We're looking for grandma.' I said, 'Come with me, I'm gonna put you on the warm bus, and I'll help you find grandma.' And so they came with me," Chamberlain said. "I picked them up and put them on my bus and called the police."

Police said the kids' grandmother was watching them but when she went in the basement for a moment, they headed outside to look for her.

"They didn't say why they left but they said they were going to find grandma," Chamberlain said.

Within minutes, the grateful grandmother arrived at the bus and explained to police that the two had wandered away from home.

Chamberlain said she was glad her bus route took her past the right place at the right time.

"If that were to happen to my children, I would hope that there would be somebody, a decent human being, that would stop and help my kids," she said.