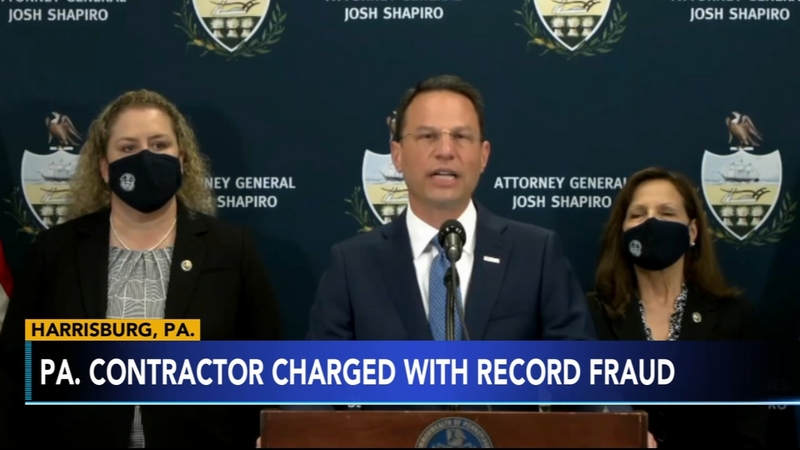 The attorney general's office filed charges against Glenn O. Hawbaker Inc. with a district judge near its headquarters in State College, accusing the company of stealing more than $20 million from workers' fringe benefits such as retirement, health insurance, life insurance and paid leave.

The company "fleeced workers in order to put more money back into their pockets," Attorney General Josh Shapiro said at a news conference. "They defrauded taxpayers who ultimately paid for these projects, and cost honest companies a fair shot at these bids."

Hawbaker was awarded $1.7 billion in state transportation construction contracts between 2003 and 2018, Shapiro said.

A message was left at Hawbaker's corporate headquarters seeking comment on the charges.

Shapiro, a Democrat, said people working for Hawbaker lost tens of thousands of dollars each, as the company allegedly used retirement and health payments to owners and executives to show it complied with the prevailing wage law. Employees reported the practices to authorities, prompting a three-year investigation.

Prosecutors claimed the company hid the diversion by artificially inflating benefits records by millions of dollars annually and by taking credit for costs that do not count toward the prevailing wage standards. They said the company has apparently used the practice for decades, but time limits for criminal charges limited the allegations to the past five years.

In the arrest affidavit, investigators said the company blamed bad advice from a former company lawyer for the decision to use prevailing wage fringe benefits money to pay benefits for all employees, including the owners and executives.

The company's practices changed after a 2018 search at its corporate headquarters. Pension money is now deposited directly into workers' individual retirement accounts, according to the affidavit. The company also now excludes internal administrative costs and other impermissible expenses when tallying up health and welfare expenditures.

The 1,200-worker, family-owned company was founded in 1952 and has facilities in Pennsylvania, Ohio and New York. It builds roads and bridges, produces asphalt and aggregate materials, runs quarries and provides engineering services.
Report a correction or typo
Related topics:
businessharrisburgbusinessconstruction
Copyright © 2021 by The Associated Press. All Rights Reserved.
More Videos
From CNN Newsource affiliates
TOP STORIES