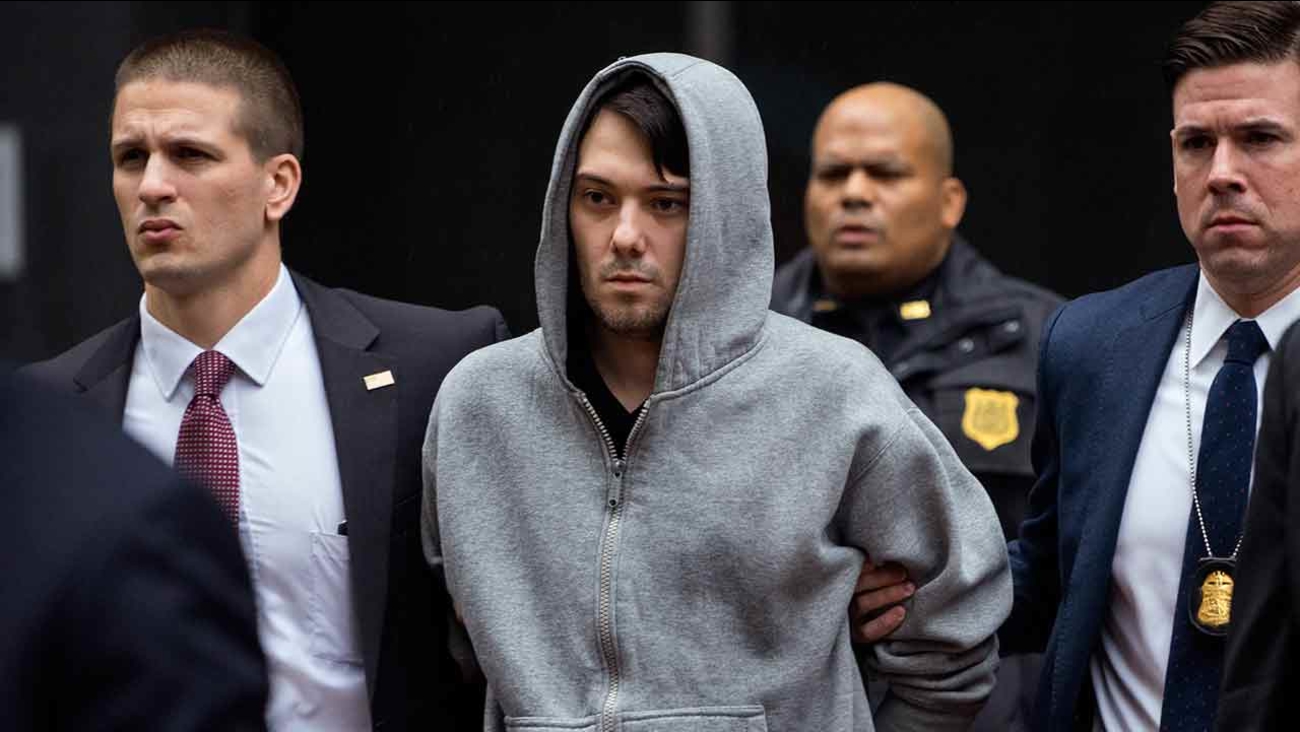 Martin Shkreli is escorted by law enforcement agents in New York Thursday, Dec. 17, 2015, after being taken into custody following a securities probe.

NEW YORK -- Martin Shkreli, the former hedge fund manager under fire for buying a pharmaceutical company and ratcheting up the price of a life-saving drug, is in custody following a securities probe not directly related to those actions.

The indictment said the men, along with others, orchestrated three interrelated fraud schemes from September 2009 through September 2014. It said they fraudulently induced investors to invest in two separate funds and misappropriated the assets of a publicaly traded pharmaceutical company, Retrophine Inc., to satisfy Shkreli's personal and unrelated professional debt obligations.

Calls to an attorney who has represented Shkreli in the past were not immediately returned.

Shkreli was the chief executive officer of Retrophin from December 2012 to September 2014, the court papers said.

Shkreli stirred public outrage earlier this fall when his company, Turing Pharmaceuticals, jacked the price of a drug used to treat a life-threatening infection by more than 5,000 percent. Turing raised the price on Daraprim, a 62-year-old drug whose patent expired decades ago, from $13.50 to $750 per pill. The drug is the only approved treatment for a rare parasitic infection called toxoplasmosis that mainly strikes pregnant women, cancer patients and AIDS patients.

Shkreli said the company would cut the drug's price. Last month, however, Turing reneged on its pledge. Instead, the company is reducing what it charges hospitals for Daraprim by as much as 50 percent. Most patients' copayments will be capped at $10 or less a month. But insurance companies will be stuck with the bulk of the tab, potentially driving up future treatment and insurance costs.

Turing, with offices in New York and Switzerland, spent $55 million in August for the U.S. rights to sell Daraprim.

The uproar over price hikes at Turing and by other companies like Valeant Pharmaceuticals led to government investigations, proposals by politicians to fight "price gouging," heavy media scrutiny and a drop in stock prices for biotech companies.

However, the price of KaloBios Pharmaceuticals shares surged from around $2 to above $40 after the struggling cancer drug developer named Shkreli chairman and CEO in November. The South San Francisco, California, company had been winding down operations when Shkreli and the group swooped in to take control and committed to a $10 million equity financing facility.

Shares of KaloBios Pharmaceuticals Inc. shed more than half their value, or $12.56, to $11.03 in early trading Thursday.

In an August civil lawsuit in Manhattan federal court, Retrophin sued its founder, Shkreli, seeking $65 million in damages and disgorgement of Shkreli's compensation from the company.

It said Shkreli repeatedly breached his duty of loyalty to Retrophin, which was formed in March 2011, by using his control of the company to enrich himself and to pay off the claims of financial fund investors he had defrauded.

The lawsuit said he obtained over $5.6 million in cash or Retrophin shares through his schemes and obtained the use of over two million shares of Retrophin, which were worth over $59 million last summer.