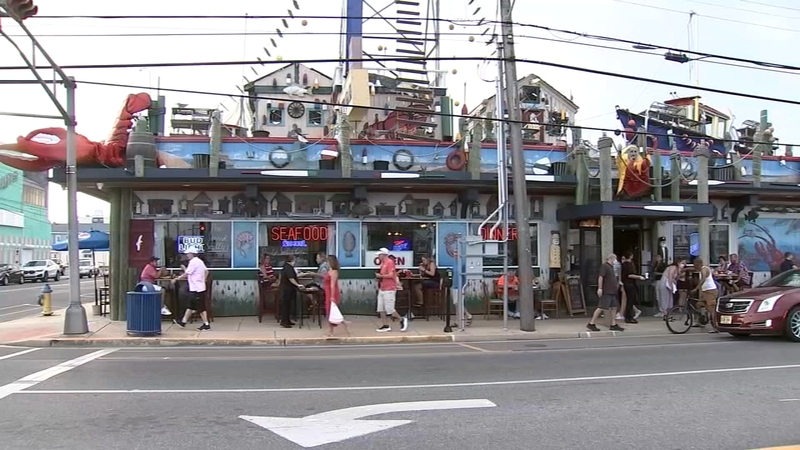 Businesses along the Jersey Shore prepare for 4th of July weekend

For this Fourth of July holiday, they ordered a freezer full of seafood but can't serve any of it indoors as inside dining remains closed.

"The restaurant isn't made for outside," said Giouros. "We only have eight tables outside."

They wished Governor Murphy would have given them the chance to open at 25 percent capacity.

Employee Anna Butler said, "You know we're mom and pop. "No one knows how they're going to pay their bills."

It'll no doubt be a holiday weekend they'll never forget.

Byron believes indoor dining may lessen the spread of COVID-19.

"If they can't eat in the establishments, you're gonna have lines for take-out, that's forcing people on top of people," said Byron.

As far as virus protocol, Byron hopes everyone maintains their distance on the beach and wears a mask on their famous boardwalk.

For this Fourth of July Holiday, many are gathered down the shore to enjoy the nice weather.

On Thursday, a lot of people were spotted down the boardwalk without masks.

"We are encouraging people when you come down please, wherever possible, wear a mask," said Byron.

The rides are now open in both Wildwood and Ocean City at 50 percent capacity.

But restaurants in Ocean City will be closed and there won't be any fireworks.

In Atlantic City, five casinos re-opened Thursday and three more are anticipated for Friday. But you'll have to go outside for food or drink.

Despite all of the setbacks and challenges, some say it's still summer and people are going to have some fun down the shore.

Related: Many are gathered down the shore during July Fourth weekend.
EMBED More News Videos

Many are gathered down the shore during July Fourth weekend.

This return of summer staples like the rides and games at Morey's Piers gave way for some families to celebrate other occasions too.

"It's different though cause you got to wear the like the mask and stuff," said Wilson.

Others in Wildwood also took note of the smaller crowds, but optimistic more will come.

A somewhat different story on the boardwalk, larger crowds, less space and masks seldom were seen.

In Avalon, the beach was sunny and being enjoyed by spaced out crowds.

"People have been social distancing without a problem," said Karen Rodemer of West Deptford, New Jersey.

Though some were ready in case crowds came near.

"I always have a mask on. I'm very careful," said Irene Cole of Port Richmond.

More masks and more precautions to enforce proper social distancing was seen in action at numerous restaurants and over at historic Margate Dairy Bar and Burger.

Owner Chris Clayton says business has been booming despite having lost a few months. But admits there have been challenges.