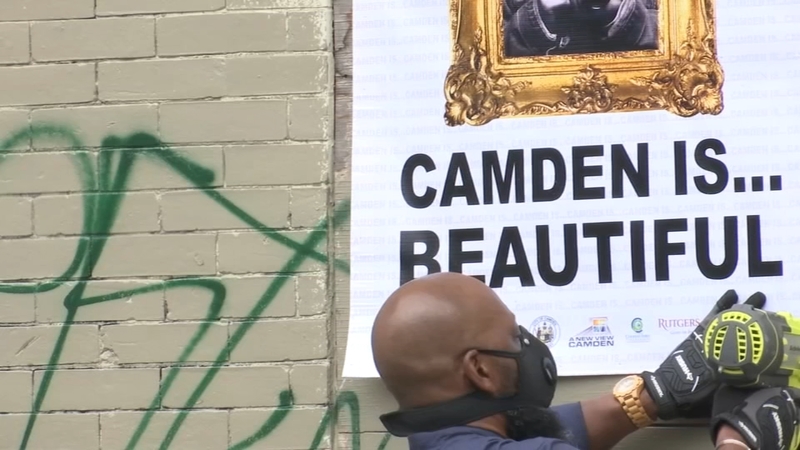 CAMDEN, New Jersey (WPVI) -- Crumbling roofs and boarded up doors are a common eyesore on neighborhood blocks in Camden.

"It makes the street look bad, it just gets filthy sometimes," said Ashley Cream, who lives next to an abandoned home.

"That's the great thing about photography where I can show how beautiful the city is by the portraits that were taken," said Montgomery.

His goal was to take 100 photographs and print them on vinyl posters.

Each person he featured finished the sentence "Camden is." Block by block, the faces are starting to cover blighted homes.

"They are sort of a band-aid solution, but they also help to bring attention and awareness and to beautify neighborhoods in the interim," said Meishka Mitchell, vice president of Coopers Ferry Partnership.

It's part of a project called "A New View Camden," which is using art to combat blight. It was supposed to be done last spring.

COVID-19 put that on hold, but the city saw a need to push it forward again.

All of the abandoned homes chosen for this project are right next to abandoned lots. That's on purpose because the next step for "A New View" is to turn those spaces into public art, as well to combat illegal dumping.

That phase is supposed to be completed in April 2021.

"When people see that artwork is being created in their city, it shows that the city matters," said Montgomery.

"It will help people just recognize that there are people out there to help us," he said.
Report a correction or typo
Related topics:
community & eventscamden (new jersey)artcommunity
Copyright © 2021 WPVI-TV. All Rights Reserved.
More Videos
From CNN Newsource affiliates
TOP STORIES