'Is this America?' Veteran officer recalls chaos of pro-Trump rioters storming US Capitol 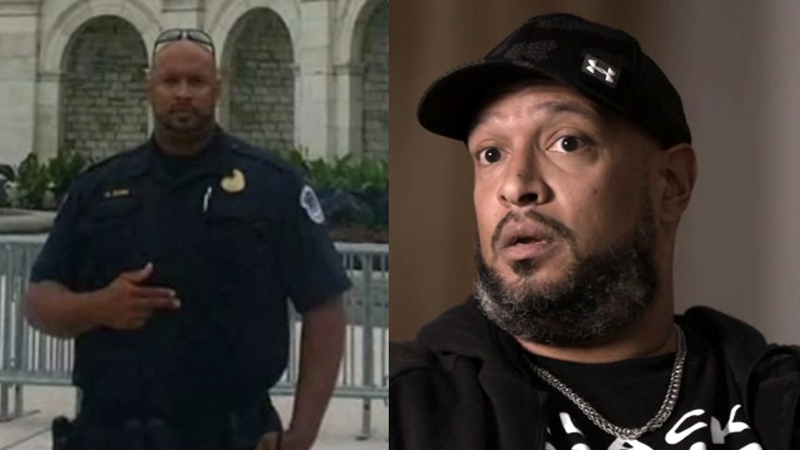 WASHINGTON -- A 13-year veteran in the U.S. Capitol Police Department, recalled his experience from Jan. 6--the day a group of Donald Trump supporters seized the US Capitol upset and in denial about their candidate losing the presidential election.

Harry Dunn spoke to ABC News' Chief Justice Correspondent Pierre Thomas. He is speaking for himself and not the department. He's the first U.S. Capitol Police officer to speak publicly about the riots.

"It's just a cloud of smoke, fire extinguishers have been going off," Dunn said.

He recalled walking into the room soon after fighting off a mob of angry rioters.

"The floors are covered in white dust, water bottles, broken flagpoles, mask, empty canisters of pepper spray, helmets, Trump flags, everything in the rotunda, just laying there on the floor."

He remembers gasping for air through pepper spray and bear mace, looking at the blood on his knuckles and hearing the relentless noise of rioters nearby.

Then, in the middle of a riot inside the hallowed halls of American democracy, this defender of that democracy was overcome by emotion.

"'I got called a (N-word) a couple dozen times today protecting this building,'" Dunn recalled telling his colleague. "Is this America? They beat police officers with Blue Lives Matter flags. They fought us, they had Confederate flags in the U.S. Capitol."

Dunn's exclusive interview with Pierre Thomas will air next Tuesday at 10 p.m. ET on a new ABC News primetime magazine called "Soul of a Nation," a series that examines the Black lived experience in America.

Dunn anonymously shared his story with Buzzfeed. That reporting was then echoed on the Senate floor during Donald Trump's second impeachment trial.

Rep. Jamie Raskin (D-Maryland) repeated Dunn's words, "Is this America?" while arguing for the conviction of the former president for incitement of insurrection.

"It took me back to a dark place because I didn't say it for a catchphrase -- I wasn't trying to create a slogan," Dunn said. "Those were my feelings and that was my truth -- it wasn't a proud moment."

As for the people who stormed the Capitol, Dunn does not mince words when describing them.

Dunn does not mince words when describing the pro-Trump rioters who stormed the Capitol.

"They were terrorists," Dunn told ABC News. "They tried to disrupt this country's democracy -- that was their goal... And you know what? Y'all failed because later that night, they went on and they certified the election."

Dunn also praised his fellow officers--including Brian Sicknick who died during the insurrection and Eugene Goodman who led the rioters away from the congressmen and congresswomen.

"There were dozens of Eugene Goodmans that day," Dunn said. "Eugene got caught on camera and I'm not surprised that he did the right thing, the brave thing, the heroic thing -- there were so many Eugene Goodmans that weren't caught on camera that day. ... and I'm proud to work with all of them."
Report a correction or typo
Related topics:
washington d.c.us capitol2020 presidential electionpresident donald trump
Copyright © 2021 WPVI-TV. All Rights Reserved.
TOP STORIES
Andy Reid in stable condition at hospital
Trial for Montco teen charged with stabbing ex-girlfriend 30 times
Shooting outside Center City hotel under investigation
Record-breaking! 66-yard field goal makes NFL history
Pfizer to ask for approval of COVID vaccine for kids in matter of days
Cheryl Burke says she has COVID-19
Mayor: 'I am heartbroken and outraged' after city tops 400 homicides
Show More
NJ high school changes dismissal time due to bus driver shortage
2 shot after altercation in Wawa parking lot; suspects wanted
Can the Eagles defeat the Cowboys? Jaws has a final score prediction
Bus driver shortage, supply chain impacting Chester Co. farm's fall
Motorcyclist thrown from bike in fatal Kelly Drive crash
More TOP STORIES News