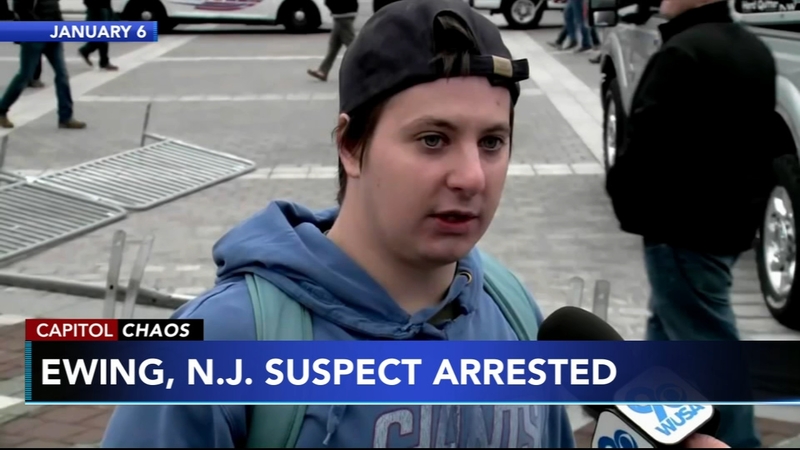 EWING, New Jersey (WPVI) -- A New Jersey man is now among the dozens of people facing federal charges after last week's siege of the U.S. Capitol.

Thomas Baranyi of Ewing was arrested Tuesday, nearly one week after making international headlines for what he witnessed.

He admitted in a TV interview that he was with a group of rioters that stormed the Capitol.

"Riot police came in and started ushering us out with their sticks," he said.

Pierre Thomas has more on a warning from the FBI about possible armed protests planned in all 50 states over the next 10 days.

He told reporters he was actually next to fellow rioter, Air Force veteran Ashli Babbitt, when she was shot and killed by Capitol Police inside the building.

"We had stormed in the chambers inside and there was a young lady who rushed through the windows. A number of police and Secret Service were saying 'get back, get down and get out of the way.' She didn't heed the call and as we raced up to grab people and pull them back they shot her in the neck," said Baranyi.

Federal authorities used the TV interview as evidence in court. Baranyi has been charged with disorderly conduct and violent entry of a restricted building. He was released on $100,000 bail.

As he was leaving the chaotic scene on Wednesday, he told reporters he was not happy with the election results and described how he breached the Capitol.

"We tore through the scaffolding, threw flash bangs and tear gas, and blitzed our way in through all the chambers. Just trying to get into Congress or whoever we could get into and tell them we need some kind of investigation into this," said Baranyi.

President Donald Trump was in the Oval Office as the House of Representatives voted to impeach him. Trump on Wednesday became the first president to be impeached twice.

Baranyi is expected in court on January 18th. A judge has restricted his travel to New Jersey, he must surrender his passport and cannot possess a firearm.

Meanwhile, Action News has also learned that the man who police say drove to Philadelphia in a Hummer with QAnon stickers, an AR-15 style rifle, ammunition and other weapons was also spotted at the riots in D.C.

Joshua Macias, a Virginia man, was arrested and charged with a number of crimes after traveling to the Pennsylvania Convention Center in November, while presidential votes were being counted.

The bail for the known President Donald Trump supporter was set at $750,000. Now the Philadelphia District Attorney is asking for his bail to be revoked and for him to be arrested after they say he was part of the insurrection in D.C.