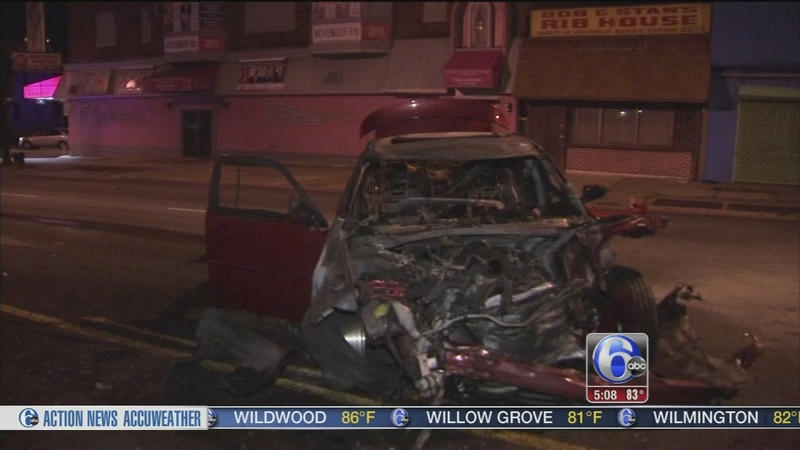 LOGAN (WPVI) -- A Philadelphia police officer is being credited with saving the life of a man he found unconscious in a burning car in Logan.

39th District Police Officer Joel Rice was returning from Northwest Detectives around 12 a.m. Wednesday when he came across a crash scene on Broad Street near Belfield Avenue.

"I saw up in the distance what looked like a fireball," said Rice.

A mangled Dodge Charger had crashed seconds earlier, first hitting a median then slamming into a parked van, which crashed into the car behind it.

The Charger then caught fire.

"I noticed flames were starting to accumulate in the engine," said Rice, "(and) starting to rise up the windshield."

Rice also saw the 47-year-old driver inside. He was sprawled across the front seat, unconscious. Rice knew he had to get the driver out.

Through an open window, he was able to open the door.

Around that time, a passing private ambulance company stopped.

"With their help, I pulled the male out of the front seat of the car as the flames were growing," Rice said.

Medics treated the driver then rushed him to Einstein Medical Center with cuts, bruises and a head injury.

Neighbors had watched in horror as the flames grew. Many had come running upon hearing the impact.

"I heard a big crash," said Matthew Newsome. "I came out, and there was a car on fire."

"The impact was very, very intense, because there was no braking," said Porter Grant.

Grant's van, the one struck by the Charger, was totaled. But he says what's important is that the officer was able to pull the driver out.

"More than luck," he told Action News. "It was a Godsend."