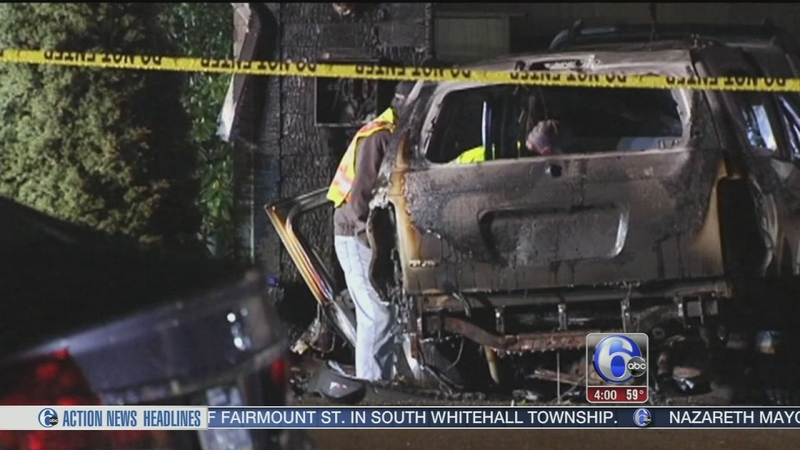 Action News has learned the name of the young man who was killed in a violent crash and fire in South Whitehall Township, Pennsylvania.

It happened at 3:30 a.m. Tuesday, when police say a driver lost control of an SUV and hit a home on Fairmount Street.

The SUV burst into flames when it hit the house, startling the homeowners awake.

A registered nurse emerged from the house and tried to help a young man who was ejected from the SUV, but she couldn't save him.

The victim has been identified as 20-year-old John Delaney Murray of New Tripoli.

A female who was in the car was being treated at an area hospital and is expected to survive.

Police say the driver was traveling eastbound on Fairmount when the vehicle careened out of control.

"We believe it struck a parked car," said South Whitehall Police Sgt. George Hummel, "veered into the house and subsequently caught on fire."

The house then caught on fire, Hummel explained.

Suvidha Bahsin's 11-year-old son heard the crash. He didn't tell his mother, who learned about it 3 hours later.

"He said it was like a big boom sound and he heard my neighbor screaming," Bahsin told Action News.

"I was scared when I saw it," Bahsin continued. "I came out and talked to the police officer, and I was scared. I couldn't believe what I saw. It could've happened to my house."

Police have not determined the cause of the crash. It was not immediately clear if drugs or alcohol played a role. A liquor bottle was found amidst the wreckage.

None of the occupants of the now-charred home were injured.

"The only thing good is, the family is okay," said Bahsin. "I hope people are more careful driving next time."