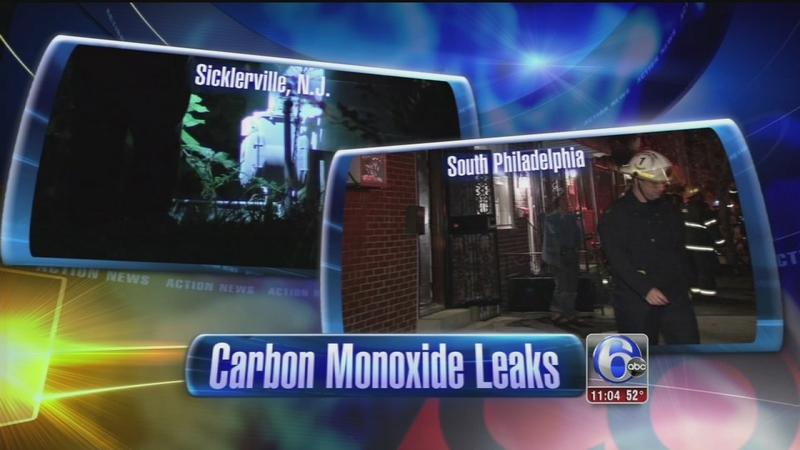 The incident in Philadelphia took place at a home on the 1200 block of South 8th Street, sending two men to the hospital.

The sick men reached out to Perry Cain for medical advice.

Cain is a friend of the residents and also a doctor.

"I got a text message from my friend saying he was dizzy and what could be the cause of it. I said many things could be the cause. Then he text me back and said his two roommates were also dizzy, had headaches, and could barely walk," Cain said.

That's when Cain came over and knew it wasn't the flu, but likely the poisonous gas.

The Philadelphia Fire Department and Philadelphia Gas Works confirmed there were elevated levels of carbon monoxide due to an old heater with rusted and unsafe parts.

The CO then spread next door, causing a woman to be transported for treatment as well.

Early Monday morning, there was a dangerous situation at a Sicklerville home also involving carbon monoxide.

The call came in before 4:00 a.m. Monday reporting a woman unconscious at a home in the unit block of Hidden Hollow Lane.

Police arrived and knocked on the front door. They say a man briefly passed out on his way to answering the door, but was able to get the door open.

All three were treated at the scene, and Action News is told the wife and daughter did regain consciousness.

All three were then taken to the hospital for observation. There was no official word on their conditions.

Neighbors told Action News a Methodist minister lives at the home with his wife and daughter. Their names have not been released.

Fire officials say the carbon monoxide readings were dangerously high in the home, so neighbors like L.B. Brown were told to stay back.

"When I came outside they said, 'Don't come too close,'" Brown told Action News.

Firefighters say the levels in the home were about three times the safe exposure limit.

Authorities were trying to determine if there were carbon monoxide detectors.

"There was no detector activated when we got here, but with readings that high, it could have saturated the detector and it malfunctioned," said Winslow Township Fire Battalion Chief Mark Mangaro.

The highest readings were found in the basement, suggesting a malfunctioning heater or other appliance.

Fire crews vented the home for several hours with large fans to bring the levels down.

"It is scary," said Brown. "We always check our own system here to see what's going on. Now we're going to have someone come in to double check behind us. It's a dangerous situation."

Fire officials said because the home is a single-family detached home, no other residences had to be evacuated during the incident.