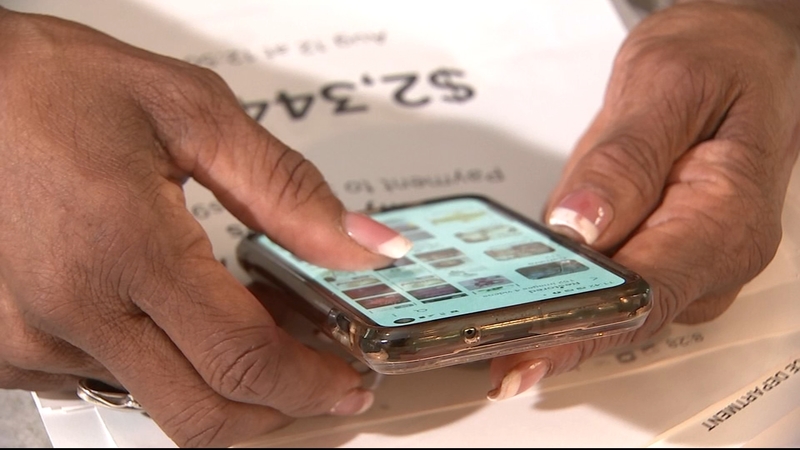 SCHWENKSVILLE, Pennsylvania (WPVI) -- More of us are using apps like Venmo, Zelle, and Cash App than ever before. A recent survey shows eight out of every ten people have used them more due to COVID.

But with the rise in use has come a huge rise in complaints, particularly about one company.

"I like the ease of it," said Angela Fitzgerald of Schwenksville, Montgomery County.

Fitzgerald uses Cash App to send money to friends and family and to get paid by customers of her small business.

Fitzgerald also uses Cash App to invest in stocks. Her account is now worth $650.

"Which is fantastic that it's growing, except I have no access to this money," she said.

That's because Cash App locked Fitzgerald out of her account, claiming she had violated terms and conditions. Fitzgerald said she tried to contact customer service to no avail.

"I felt completely helpless," she said. "And that's why I reached out to Action News."

"I wanted to send my granddaughter $100," said Sheila Jackson of Atco, Camden County.

Jackson tried sending it via Cash App but ran into problems.

"So I came home, Googled the number (and) called the number," she said. "They answered, 'Cash App.' So I thought I was talking to Cash App people."

But the number was bogus and Jackson said while she was on the call, the con artist on the other end drained her entire bank account. She lost roughly $4,689.

"I got a call from someone claiming to be PECO," said Karen Eubanks of Phoenixville, Chester County. "They had trucks on their way to the house to turn off the power."

Eubanks did as she was told. She downloaded Cash App for the first time and paid $700. Then she learned, she, too, had fallen victim to a scam.

"They're using these cash apps and all this stuff for illegal transactions," she said.

According to mobile intelligence firm Apptopia, the number of Cash App reviews mentioning "fraud" or "scam" jumped 334.9% in a year. Compare that to 191% for PayPal and 84% for Venmo.

"Fifty percent of respondents say that they have been targeted by a scam," said Audrey Small of Go Fish Digital.

A consumer survey on cash apps, in general, shows how vulnerable users could be.

"Forty-seven percent of respondents say that they've received a money request from a stranger," said Small.

Cash App told the Troubleshooters, "Preventing fraud is critically important to Cash App. We continue to invest in and bolster fraud-fighting resources by both increasing staffing and adopting new technology. We are constantly improving systems and controls to help prevent, detect, and report bad activity on the platform."

But some said the company is not doing enough and needs to improve its customer service.

"I called once and I just held forever and no one picked up," Fitzgerald said. "If, in fact, they were the last app on earth to send money to friends and family, I would write a check."

The good news is the Troubleshooters did get in touch with Cash App on Fitzgerald's behalf.

"Less than 24 hours after speaking with you and I now have the money being transferred to my bank account," she said.

Unfortunately, because they were targeted by scammers, the other two consumers will likely never get their money back.

So beware scammers often impersonate Cash App employees. They urge consumers to not give your PIN or sign-in code outside of the app. And make sure you have the correct customer service number which is 1-800-969-1940.

Cash App shares these tips if you need to reach customer service or become a victim of a scam:

-If you believe you have fallen victim to a scam, you should contact Cash App Support through the app or website immediately.

-As a reminder, the Cash App team will never ask customers to send them money, nor will they solicit a customer's PIN or sign-in code outside of the app.

-Please be aware that Cash App employees are often impersonated by scammers circulating fake phone numbers online. Never call anyone claiming to represent Cash App at any other number. And remember that Cash App will never ask for your PIN or sign-in code.