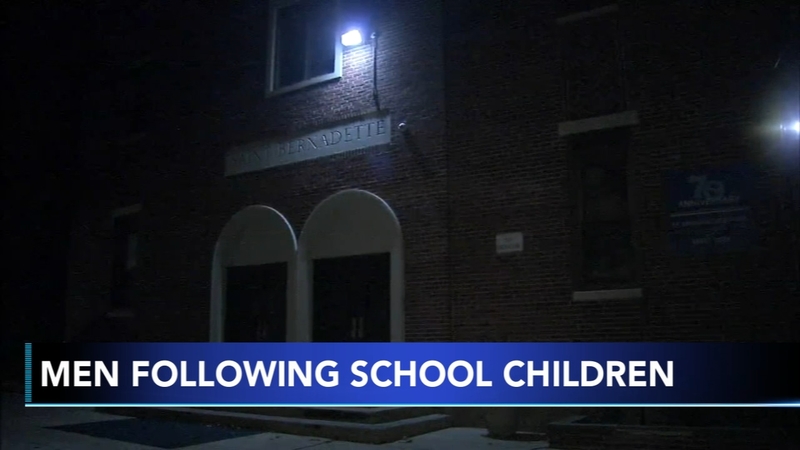 "You can't be too cautious," said Upper Darby Police Superintendent Michael Chitwood. "You have to investigate. And you have to look for similar type activity that have occurred in the general area."

Police said they were walking down Bond Avenue when they noticed a man staring at them as he slowly drove by in a black sedan.

Two of the boys were 11 years old. One one of them was 7 years old.

The boys told police after the man passed them, he pulled into a driveway on Concord Avenue, turned around, and started driving back towards them.

They ran away and told a parent who notified police.

Investigators said the suspect was a white man who was wearing a baseball hat and sunglasses.

Officers have been in contact with the principal at St. Bernadette.

While the man in that car didn't say anything to the children, police said, another man did when he approached a boy last Monday near St. Dorothy Catholic School.

The 14-year-old had left St. Dorothy and was outside of his house when he said a man drove up in a dark van with white stripes.

"He stops the van. Says to the kid 'What's up? Hop in,'" said Chitwood. "And the kid got scared. But then his father was there. So the father walked up to see what was going on and the van took off."

That suspect is believed to be a middle-aged Hispanic man who was wearing aviator sunglasses.

"Anybody who would ride around and talk to kids, trying to get kids into the car is sick," said Chitwood. "They are perpetrators and they're they bad guys here. And they've got to be taken off the street."

Investigators think the suspects are two different men. Police are doing their best to track them down. They want to hear from anyone in the community with information.