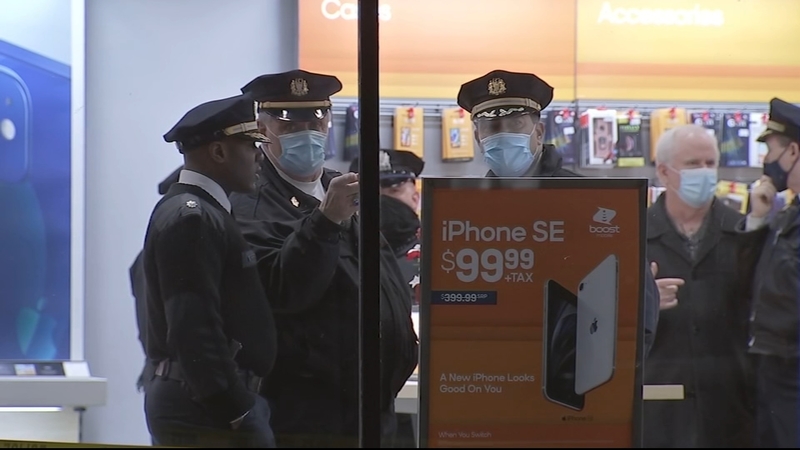 PHILADELPHIA (WPVI) -- Police are investigating a series of robberies at cell phone stores in Philadelphia, along with Bucks and Montgomery counties.

New video released by Philadelphia police shows two men rifling through the Boost Mobile store on Ridge Avenue in Roxborough on Tuesday evening, just after one of them shot the store's owner in the leg.

Police say the men got away with 11 iPhones, including the victim's phone, and $500.

Police say they were driving an older model silver Chevy Impala, and say one of the suspects was caught on camera without his mask on before the robbery.

"The gunshot happened next to us. So we lock our doors and everything. It's crazy," said Jerry Zou, whose family owns Dream House Asian Bistro next to Boost Mobile.

Philadelphia police have released new surveillance footage of two suspects in an armed robbery at a Boost Mobile store in the Roxborough section.

Folks from neighboring businesses say they can't believe it happened around 5pm, a very busy time on this stretch.

"Usually around here it happens after you're closed. You never hear about getting shot in Roxborough," said Lina who works at Roma's Pizza two doors down.

On Thursday, a Metro PCS in Warminster, Pa. was robbed and an employee was shot in the stomach.

Police released surveillance images of two suspects outside the store.

Bucks County District Attorney Matt Weintraub says the victim is expected to survive. He also says various agencies are working together amid a rise in robberies like this.
"We suspect that this may be one of a larger series, a larger conspiracy," said Weintraub. "A number of these robberies have been occurring in Montgomery County and Philadelphia as well as this one in Bucks County."

A spokesperson for the Montgomery County District Attorney's Office says they are investigating the recent robberies of three cell phone stores in Lower Merion Township, Norristown and Upper Moreland Township.

"The product of the crime is highly portable, it's very valuable and it's immediately accessible," said Weintraub.

Arrests have not been made in either of the armed robberies this week.