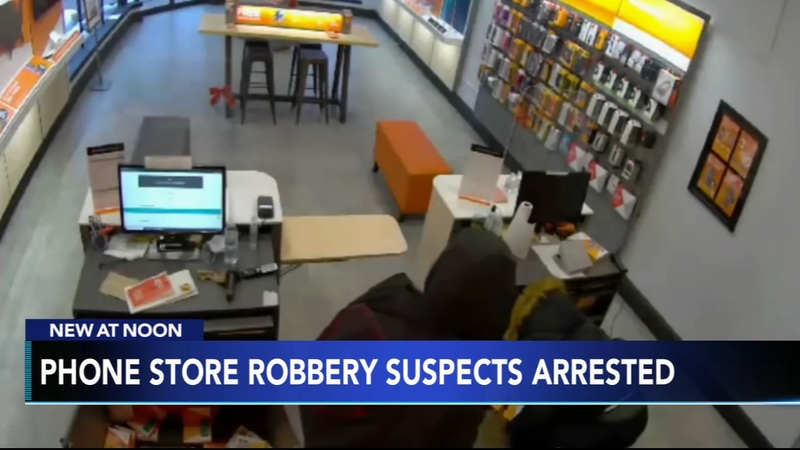 PHILADELPHIA (WPVI) -- Philadelphia police have made two arrests in the shooting of a cell phone store owner during a robbery last week.

Investigators say the two may also be responsible for multiple gunpoint robberies in the city and surrounding counties.

The suspects were arrested on Sunday, police said. Their names have not yet been released.

The shooting happened at the Boost Mobile store in the 6100 block of Ridge Avenue around 5 p.m. on February 23.

Surveillance video showed the suspects rifling through the store after the owner was shot in the leg.

Both suspects were armed with guns when they were arrested. One of the guns was stolen during the robbery of a phone store in Lower Merion Twp. on February 10.

Philadelphia police have released new surveillance footage of two suspects in an armed robbery at a Boost Mobile store in the Roxborough section.

On Thursday, a Metro PCS in Warminster, Pa. was robbed and an employee was shot in the stomach.

Police released surveillance images of two suspects outside the store.

Bucks County District Attorney Matt Weintraub told Action News last week that the victim is expected to survive. He also says various agencies are working together amid a rise in robberies like this.

"We suspect that this may be one of a larger series, a larger conspiracy," said Weintraub. "A number of these robberies have been occurring in Montgomery County and Philadelphia as well as this one in Bucks County."

A spokesperson for the Montgomery County District Attorney's Office says they are investigating the recent robberies of three cell phone stores in Lower Merion Township, Norristown and Upper Moreland Township.