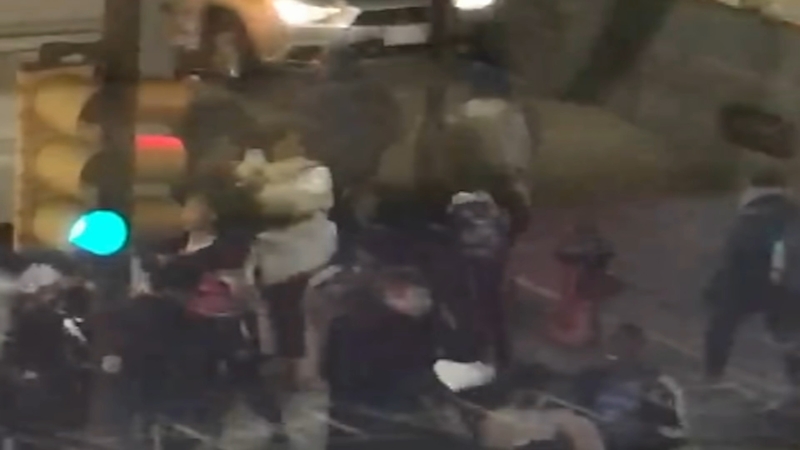 PHILADELPHIA (WPVI) -- Philadelphia police are investigating another attack involving a group of teens in Center City.

The latest incident happened on Monday night outside of a Wendy's on Chestnut Street near 16th, before traveling to the intersection of 15th and Chestnut outside the Wells Fargo Bank.

A second video shows the chaos from the ground. One of the 17-year-old victims says she went into survival mode.

"I felt like my face was bubbling, and I couldn't figure out what was going on," she said. "I kept screaming, 'I can't see.'"

Too shaken to show her face, the 17-year-old senior from Parkway Center City High School says she was attacked and robbed alongside three of her friends by a mob of kids from another school.

"What I started feeling was people going into my pockets and taking my purse off of me. When I got in the ambulance, I didn't realize that my hair wasn't attached to my head anymore," the teens said.

"My daughter has never been in a physical altercation, so to her being attacked that way, that hurt me," said Jill Walston.

Walston's daughter was taken to an area hospital.

Police have beefed up patrols on the block and is acquiring surveillance and social media videos to identify the suspects.

"How many more altercations will it be until someone is down on PA at the morgue?" asked Tamieka Daniels.

This is the latest in a string of attacks. Just last week, in the same spot, surveillance video caught a mob of teens beating and stomping a motorist.

"A lot of scratches, it became too much for him," said Daniels.

"Is he afraid to leave the house?" asked reporter Christie Ileto.

"He's not afraid to leave the home, but what I just try to explain to my son is be mindful of your surroundings, but what can you do when you're defenseless," said Daniels.
Report a correction or typo
Related topics:
philadelphiaattack
Copyright © 2022 WPVI-TV. All Rights Reserved.
TOP STORIES
Police: Triple shooting leaves 1 dead in West Oak Lane
One man dead after West Philadelphia shooting
AccuWeather: Spotty Showers Today
Officials ID 5 killed in Pottstown explosion; most were children
Official admits police made 'wrong decision' in TX shooting
Victim of elementary school attack says it could have been prevented
Police: Store owner robbed, assaulted with brick in North Philly
Show More
Dann Cuellar retires after 34 years at Action News
Another Trenton, NJ firehouse hit by gunfire
Rainy start to Memorial Day weekend at the Jersey Shore
Bank employees help kidnapped woman after she asks for loan
Massacre survivor says gunman told them: 'You're all gonna die'
More TOP STORIES News