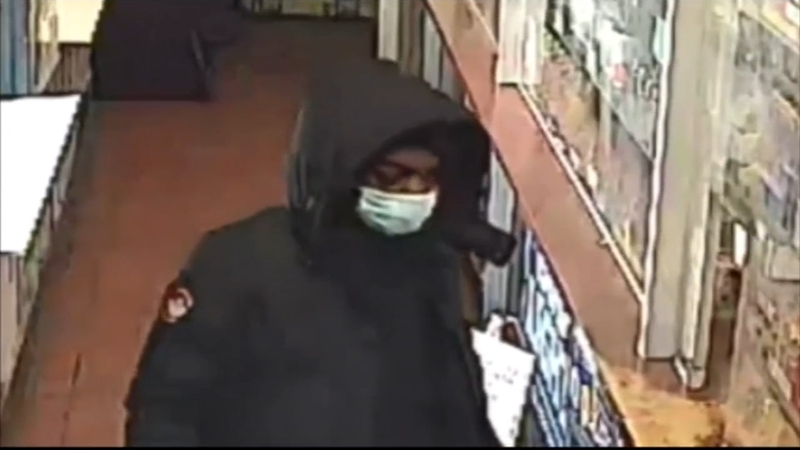 PHILADELPHIA (WPVI) -- Philadelphia police have identified the suspect who has been arrested for the rape of a woman inside a bathroom at a Macy's store in Center City.

Jaleel Uqdah, 22, was arrested at his home in the 1200 block of North 53rd Street in West Philadelphia around 7:30 a.m. Wednesday.

Philadelphia police identified the man arrested for the rape of a woman inside a Macy's store in Center City.

Captain Mark Burgmann, who heads the Special Victims Unit, stated that once inside Uqdah's apartment that evidence was discovered.

"We were able to execute a search warrant at the address of our offender. We took him into custody and recovered all of the clothing, detailed clothing, he was wearing along with one of the skewers he had in his possession," said Burgmann during an afternoon press conference.

Philadelphia police release video of the suspect accused of raping a woman at Macy's on Feb. 21, 2021.

Police believe Uqdah entered the third-floor public restroom inside Macy's a little after 11 a.m. on Sunday and waited for a victim.

When the 55-year-old woman entered the bathroom, Uqdah jumped over the stall and, armed with cooking skewers, told her that if she screamed he would hurt her.

That's when the sexual assault occurred.

Philadelphia police released photos and video of the alleged attacker on Monday in a plea to the public to assist in finding him. On Tuesday evening, clearer footage of the suspect was shared.

Later that evening a tip call came in that led to Uqdah's arrest.

Philadelphia police are searching for a suspect accused of raping a woman inside the public bathroom at a Macy's in Center City.

SEPTA police assisted SVU detectives in reviewing and gathering hours of footage of the suspect on his journey home to West Philadelphia by way of public transit.

He then boarded a bus to 53rd and Girard where he shopped inside several local neighborhood stores. SEPTA police assisted SVU detectives by tracking the suspect's ride through the public transit system, bringing them to his West Philadelphia neighborhood.

Uqdah has no prior sexual assault related arrests. Police are now looking to see if he has committed this offense before now that his DNA is in the system.

In a statement, the District Attorney's Office said it will continue to prosecute two unresolved cases involving Uqdah that have been procedurally delayed due to the COVID-19 pandemic.

Included is an arrest for burglary and related charges for a June 2020 incident involving multiple individuals unlawfully entering a Family Dollar store. There are also charges for theft and related offenses for an August 2019 incident involving a SEPTA cashier booth.
Report a correction or typo
Related topics:
philadelphiarapecrimemacy'ssexual assault
Copyright © 2021 WPVI-TV. All Rights Reserved.
RAPE

No pleas entered for suspects in Kristin Smart killing