VIDEO: Hero jumps on SEPTA tracks to save man after fall 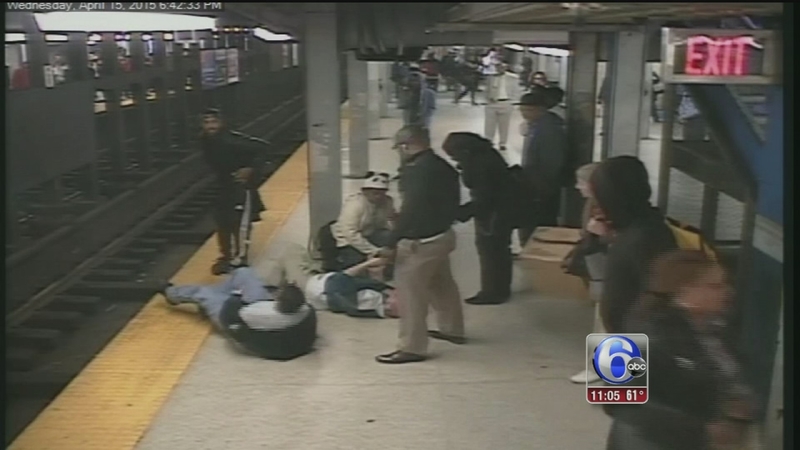 VIDEO: Hero jumps on SEPTA tracks to save man who fell

CENTER CITY (WPVI) -- Action News has obtained video of the moment a SEPTA commuter stumbled onto the subway tracks after getting too close to the edge Wednesday night.

Seconds later a Good Samaritan springs into action, risking his own life to save a stranger.

It happened around 6:30 p.m. Wednesday on the westbound Market-Frankford El tracks at 15th Street Station.

28-year-old Charles Collins of South Philadelphia can be seen in the video wearing an Eagles jacket, walking away from the camera.

Moments later an older man, identified as Alfred McNamee, is seen walking near the SEPTA platform's yellow line. He then takes a misstep and tumbles onto the tracks.

Some horrified witnesses run, but Collins disregards his own safety and jumps onto the tracks to lift McNamee to safety as other witnesses help pull both of them off the tracks.

Collins tells Action News, "I just saw him down and jumped down... just instincts."

Collins suffered a minor leg injury, but McNamee's injuries are serious. In the tumble of five feet straight down he suffered a broken back, a shattered knee, broken ribs, and a severe injury to his spleen that may require surgery.

Collins went to the hospital Thursday to check up on McNamee, but he is refusing to call himself a hero.

SEPTA says Collins' actions were noble and courageous, but they'd prefer it be handled another way.