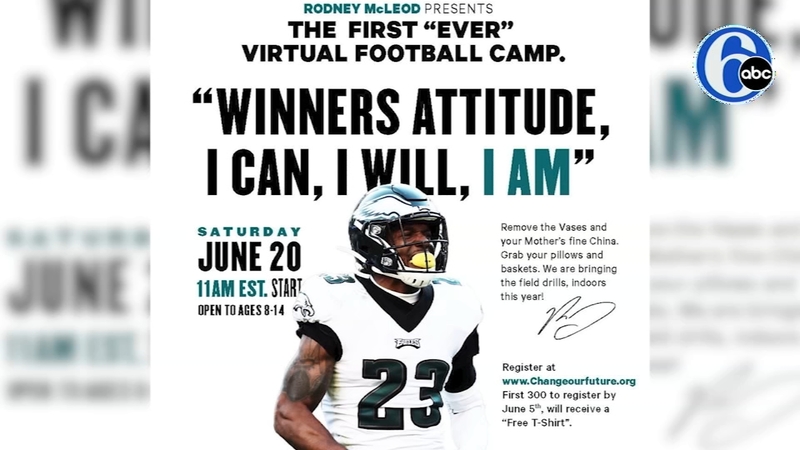 Rodney McLeod, and wife prepares to host their First Ever Virtual Football Camp

PHILADELPHIA (WPVI) -- Philadelphia Eagles' safety Rodney McLeod and his wife Erika McLeod announce their official partnerships with the NFL, Boys and Girls Club of America, and WHYY under their organization Change Our Future.

This is all happening ahead of McLeod's First Ever Virtual Football Camp on Saturday, June 20, at 11 a.m.

"With everything that's going on right now, so much has been stripped away from these kids," said McLeod. "It's important for myself and my foundation to insert ourselves and host this first ever virtual camp."

Change Our Future, is a non-profit whose mission is to help empower youth through education, advocacy, and awareness in the areas of youth development, healthy lifestyles, and community enrichment.

"We wanted to come and enter into the environment that we're all forced to live in," said McLeod. "And that's either our living room, basement, front yard, back yard."

McLeod says the virtual camp is not going to be held at a park or stadium unlike previous camps held amid COVID-19.

"We're going to be right there in our homes as well," said McLeod. "Working out with these kids."

With the recent events displayed throughout the city, McLeod plans to introduce a re-education program through schools, to help build awareness surrounding African-American history.

"After talking to several teachers that we know from various cities, it was evident that was missing," said McLeod. "It's almost been erased and unfortunately the only time it's discussed is during Black History Month."

McLeod says he and his wife are now making efforts to have some of the tough conversations with city officials, other state representatives and The School District of Philadelphia.

While McLeod's focus is to move forward and work on better resource opportunities for the youth, He wants to make sure this camp is one step closer to that goal.

"It's important to take our minds off of everything that's going on," said McLeod. "The world is so dark right now because of COVID-19 and the recent tragedy of George Floyd, we want to be able to shine some light and give these kids hope for the day. Keep them uplifted and give them hope."


"The fight for social justice, systemic racism police brutality is a fight about freedom, a fight for change. What we witnessed recently was horrific. A black man was murdered, he suffered 8:46 seconds while a police officer placed his knee on George Floyd's neck. Unfortunately, what transpired with George Floyd happens to often, police brutality is normalized, and we demand it end today. The life of a black man or woman should not mean less but have equal substance in America. "Black Lives Matter" As a nation its time to face the ugly realities of injustice that are so common to black lives.

Protest are necessary including in Philadelphia. Protest call attention to a cause/problem at hand. It is a call to action. Protest existed for years, Selma, Montgomery Bus Boycott, and March on Washington. It's always been one movement with one goal equality. Though I do not agree with the looting, necessary evil is needed to gain the attention necessary. It was important for my wife Erika and myself to protest with our brothers and sisters of Philadelphia over the past week. We love this city, we feel the pain, see the anger, and recognize the painful history of the city. We must continue to lift our voices in solidarity and stand united.

This is why Kap took a knee and others followed his lead. Drew comments came off as tone deaf and insensitivity to the situations at hand. His comments provided a window for others to see the problem and hold him accountable. Only he knows if his apology was genuine. I also know what you say the first time is what you mean. Apologies are just words, we need action. I am hopeful because of the amount of my peers who have spoke out. I think it's a sign injustice will no longer be tolerated.

Protest is apart of the change process. We must implement solutions as well, especially for our young people. They have the power to effect change, nice to see them marching on the frontlines for social injustice. But I also want equality for them in other vital areas. Equality in access to healthcare, educations, jobs. COF is making efforts for change by partnering with NFL, Boys and Girls Club of America, and WHYY. All to bring needed solutions to the problems youth face."
Report a correction or typo
Related topics:
sportsphiladelphiacampnflfootballphiladelphia eagleseventssportscommunity
Copyright © 2021 WPVI-TV. All Rights Reserved.
TOP STORIES
2nd arrest made in deadly shooting outside Pat's Steaks
Suspect ID'd in deadly hit-and-run rampage in Philly, Montco
Stranger falls capturing marriage proposal. Now she needs your help
Security guard caught on video punching man at SEPTA station
Phillies postpone game against Nationals amid COVID-19 outbreak
Woman caught on racist tirade in NJ hotel to be held until trial
Mom gives 'bear hug' to families who lose infants
Show More
School districts across Delaware Valley react to CDC recommendation
9 new victims identified in Bucks Co. sextortion case
Woman pleads guilty following deadly DUI crash
NJ officials recommend masking in indoor settings with increased risk
Moratoriums on evictions, foreclosures ending soon. Here's what to do
More TOP STORIES News