Items in the collection housed at Temple University include sculptures, books, relics and documents.
WPVI
By TaRhonda Thomas 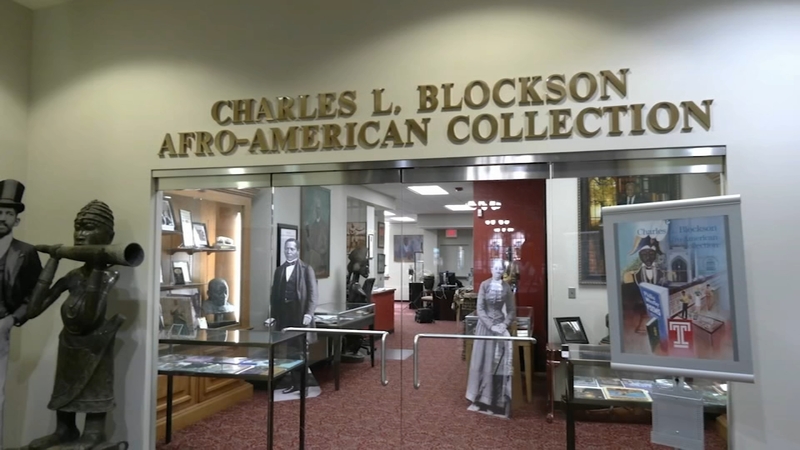 PHILADELPHIA (WPVI) -- Behind the glass doors on the first floor of Temple University's Sullivan Hall lies centuries of history.

"(It's) one of our nation's richest repositories that relate to African American history and culture," said Dr. Diane Turner, curator of the Charles L. Blockson Afro-American Collection.

Items in the collection range from sculptures, books, relics and historic documents. They all detail the African-American experience.

It's the life's work of one man: Charles Blockson.

"He is a national treasure," Turner said of Blockson.

The 88-year-old's collection of history began when he was just nine years old, and a teacher told him that his people have no history.

"He was in a classroom and they were talking about American History. He raised his hand and asked the teacher what contributions Negroes had made," said Turner.

"I asked her if we had any heroes besides Booker T. Washington and George Washington Carver," Blockson recalled. "She said, 'No Charles. Negroes were born to serve white people.'"

It's something Blockson knew wasn't true, given the education he'd gotten at home with his father being a member of the NAACP and reading the Philadelphia Tribune regularly. His grandfather also contributed to Blockson's knowledge of his history.

"My grandfather sang spirituals on Sunday. I knew we had a history," he said.

Blockson went in search of items that documented that history. He began using his allowance and any other spare money he got to buy items for his collection. Among his favorite finds: books.

" I went to book stores, later, all over the world," said Blockson.

"There was a copy of The Underground Railroad. I think he got it for about $5," Turner recalls of one story Blockson told him of finding a historic book.

As the collection grew, Blockson became the nation's foremost expert on The Underground Railroad. He gained the attention of the family of one of his heroes: Harriet Tubman

"He said 'you won't believe this,'" Turner said of a call Blockson made to her after speaking to Tubman's relatives. "He said 'I have just been bequeathed 37 personal items of Harriet Tubman.'"

The items include a Bible, a spoon and a very special item of clothing.

"Among them, the shawl that Queen Victoria gave Harriet Tubman," said Blockson.

That shawl is now at the National Museum of African American History and Culture in Washington D.C.

Other parts of Blockson's collection are stored at his alma mater, Penn State.

But so much more is on the campus of Temple University where Blockson has housed much of his collection due to the university's focus on diversity and its location in an African-American-centered area of Philadelphia.

Blockson says the collection is not a museum. It's more of a reference for people.

"Anything you see here on display is almost like a teaching tool," Turner said.

The community is invited to research and contribute their own items. The collection has gotten things like newspaper articles, magazines and household items from local families.

Blockson advises everyone to take their own inventory and preserve it.

"Keep your magazines. Don't throw anything out," he said.

Blockson wants to continue to grow the collection and hopes to secure more space on the Temple campus.

"We need more space for the Blockson collection," he said.

Because the hundreds of thousands of items prove what he knew all along: that, despite what one teacher said to him, everyone has a history worth celebrating.