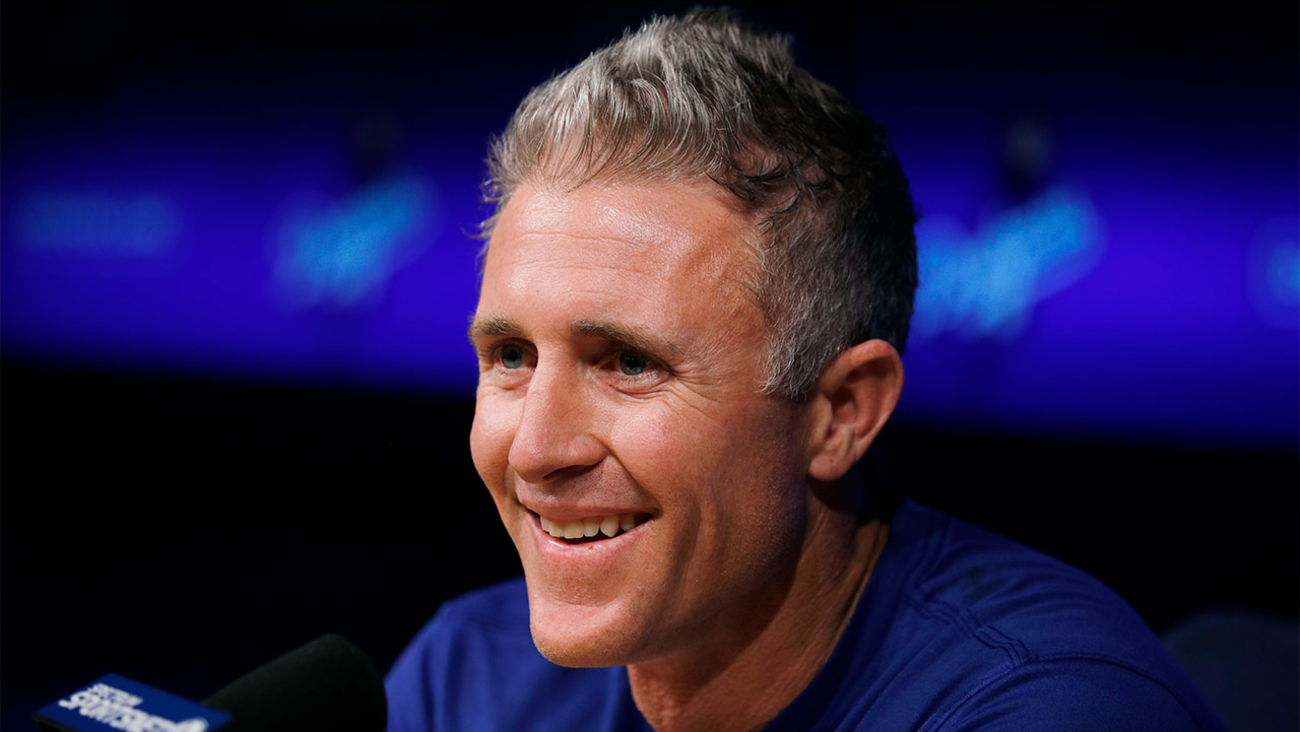 PHILADELPHIA (WPVI) -- Former Philadelphia Phillies All-Star Chase Utley surprised one of his biggest fans who is fighting on the front lines of the coronavirus outbreak.

Dr. Mark Mikkelsen, Chief of The Hospital of the University of Pennsylvania's Critical Care Section and currently head of the COVID-19 unit, was a guest Monday on MLB Network's "Intentional Talk," with hosts Chris Rose and Kevin Millar.

To start the program, Dr. Mikkelsen discussed his experiences in the hospital and what the health care professionals are striving to achieve.

"Just like baseball, it's a team effort," Mikkelsen said. "The goal is to get (the patients) home to their family. We are getting there each and every day. We're having folks who are able to get back to their loved ones and, in general, that's what our sights are on. Each and every day we're able to achieve that is an unbelievable success."

Back in 2008, Mikkelsen was one of the thousands of Phillies fans lined along Broad Street who witnessed the World Series Championship Parade in person. He said, while at the time Cliff Lee was one of his favorites, as far as position players went, it was Utley.

"I had my t-shirt, used to wear it with pride. Loved when he came back over the last couple of years to celebrate being back in Philly with the Philly faithful," Mikkelsen said.

Chase Utley and his wife share a look inside their home during COVID-19.

That's when Utley made his surprise appearance on the show bringing a smile to the face of the Associate Professor of Medicine at the Hospital of the University of Pennsylvania.

"Doc, how are you doing?" Utley asked.

"Aw man," Dr. Mikkelsen said, "This is pretty cool. My boys are going to be unbelievably psyched."

Mikkelsen thanked Utley for giving everyone a diversion, a chance to think about baseball and hope for its return as soon as possible.

Utley replied with his own gratitude for the doctor.

"Thank you for the support over the years. Thank you for what you are doing and what your staff and team are doing for the city of Philadelphia," Utley said. "Obviously you recognize how important a role you are playing and I want to thank you personally from the bottom of my heart."

Utley, who spent 13 seasons with the Phillies, understands the team mentality.

Dr. Mikkelsen has a team of his own in Philly, one that is connected to every other across the globe fighting the same battle.

"Chase, this is a moment I won't forget. I'd be remiss if I didn't bring it home with the idea that says we are an unbelievable international team who is coming together to fight something we haven't seen before. Nurses, docs, and all-stars, each and every one of the folks across the world that are coming together to do this," Mikkelsen said of those fighting the COVID-19 pandemic.

Not surprisingly, Utley's famous (and colorful) parade speech at Citizens Bank Park became the topic of conversation between the two.

"I have three boys so I have to be careful about the language. I think for the Philly faithful, it was a real moment," Mikkelsen said. "It was authentic and there's nothing more that a Philadelphia sports fans appreciates than authenticity and being real."

Utley confirmed his word choice was spur of the moment and just what came to his mind at the time.

"I said what I felt. To play in that city is a remarkable experience. There's nothing else like it. The passion that the fans have. They support you to the end of the day; if they don't, they let you hear about it. But you have to respect that and understand it," Utley said.

Mikkelson, who coaches all three of his sons in baseball, revealed his oldest somehow, in a twist, turned out to be a Los Angeles Dodgers fan. Utley said he understood what that's like.

The second baseman went on to finish his career in LA after his time in Philly. He said his boys were confused which team to root for when he was still playing.

As for Dr. Mikkelson, "with passion and compassion" he remains positive as he continues to treat those affected by the novel coronavirus.

His positivity is also reflected in his hopes for the return of baseball and another chance to cheer on the Phillies down Broad Street.

"Every year, I say the same thing - 'This is our year.' Some years it's correct, many it's not. But we'll get back," Mikkelsen said.