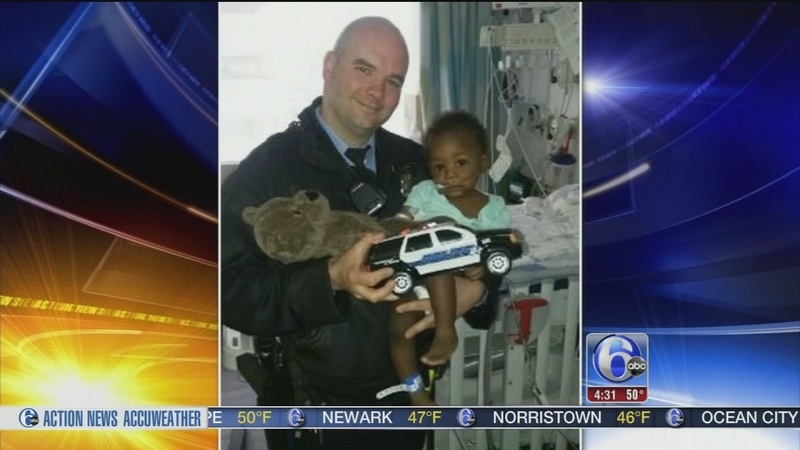 HUNTING PARK (WPVI) -- One-year-old Jayson Smith is on the road to recovery at St. Christopher's Hospital for Children.

And his mother, Yasmin, credits three Philadelphia police officers with going above and beyond the call of duty.

She says the officers, from the 39th District, are heroes who saved the life of her one-year-old son.

"I don't really call myself a hero. That's our job, to help out any way," Officer Daniel Williams said.

It was Monday morning and Jayson was experiencing serious respiratory problems at the family's home in the 2900 block of Wishart Street in North Philadelphia.

He was hospitalized for wheezing a week ago.

"His eyes are still rolling into the back of his head. He's just completely unresponsive. Something I wouldn't wish on my worst enemy to see their child like that. That has to be the worst thing I have ever witnessed," Smith said.

"His arms were dangling. It didn't look good. We stepped in the house and immediately started CPR," Williams said.

"I began rescue breathing in an attempt to resuscitate the child while Officer Williams and Officer Woolford were monitoring his pulse," Elliot said.

Officer Elliot performed CPR for about ten minutes before paramedics arrived and rushed him to St. Christopher's where the doctors took over.

Jayson's fine now, on the mend thanks to the officers and their efforts.

On Tuesday they visited him, bringing the happy little boy a truck and a teddy bear.

"I'm glad we were there because if we hadn't arrived when we did, we don't know what the outcome would have been," Elliot said.

"Yes, it is their job, but you don't see officers going above and beyond like they did. I am completely indebted to them because they really saved my son," Smith said.

Officer Elliot also went back to the Smith home to make sure Jayson's father and three older sisters were OK.

This was most definitely beyond the call of duty.