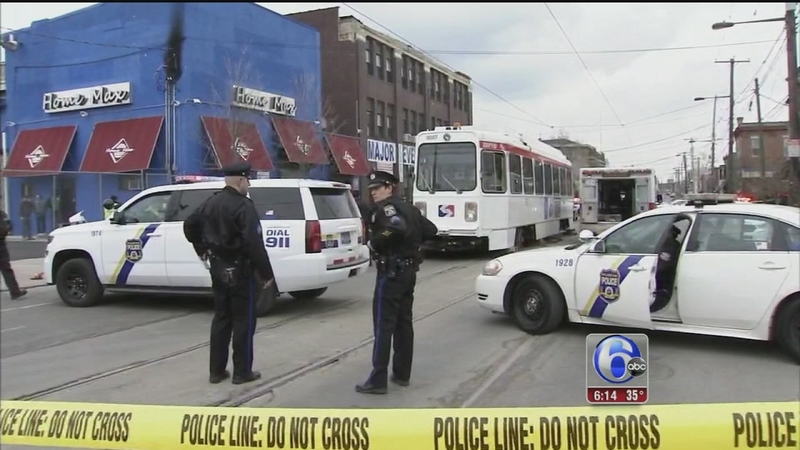 WEST PHILADELPHIA (WPVI) -- Officials say a 2-year-old child was struck and killed by a SEPTA trolley in the Parkside section of West Philadelphia.

The incident happened around 1:00 p.m. Thursday at the intersection of 51st Street and Lancaster Avenue.

It was a horrific collision that happened in a split second.

Vincent Hall Sr. saw the young boy slip free from his mother's grip, and dash across Lancaster Avenue in front of an on-coming Route 10 trolley.

"The child broke away from the mom and there was nothing that could be done," said Hall Sr.

Relatives at the scene were emotional as police and rescue personnel rushed to try to lift the trolley off the boy.

It was emotional scene for everyone who watched it unfold.

SEPTA says they are still investigating. Witnesses tell Action News the trolley driver honked his the horn and tried to stop but the boy was pinned underneath.

"At that point he was blowing his horn and just ran over the child and dragged him up half a block," said Hall Sr.

The child was rushed to Children's Hospital of Philadelphia where he was pronounced dead.

"It was a horrible situation, which is currently under investigation. We'll find out exactly what happened, until then there's really not much that we can say other than to give our condolences to the family," said SEPTA Spokesperson Jerri Williams.

Williams tells us that since the trolley is on a track, there is no way it can swerve to avoid an accident.

The only thing the driver can do is hit the breaks but the weight of the train makes breaking in an instant very difficult.