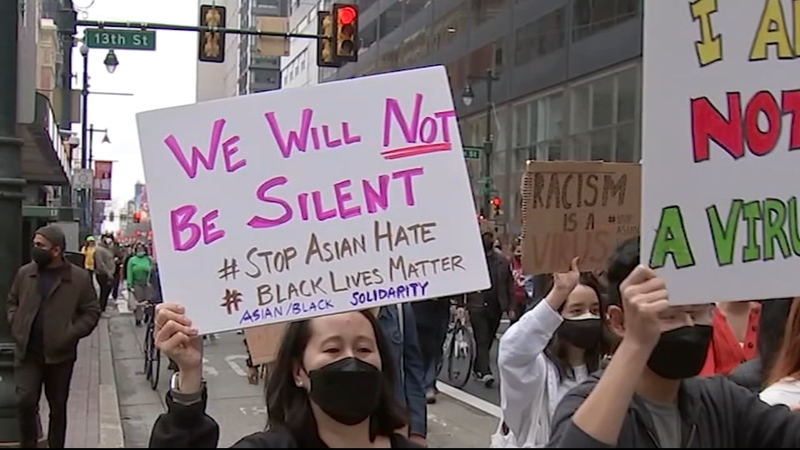 PHILADELPHIA (WPVI) -- Across Philadelphia, incidents of hate and racist speech have drawn the attention of community advocates and police.

In the city's Chinatown section, police have opened an investigation into what authorities described as hateful and racist vandalism after graffiti was found on a flower planter at 10th and Vine streets.

Police Commissioner Danielle Outlaw took to Twitter to denounce the racist rhetoric at the site and another in South Philadelphia.

We are actively investigating several incidents of hateful and racist vandalism in Chinatown and South Phila. This national and local surge in racist rhetoric & acts of violence will not be tolerated. We denounce acts of hate targeted towards individuals and groups based on 1/2

Action News has confirmed police have opened investigations at the former William Pierce School, where racist graffiti was found on a wall, and at the the school district building, where officials received what police described as a "racially charged letter with swastikas." Philadelphia police are continuing to investigate each of these incidents.

Executive Director of the Chinatown Development Corporation John Chin says the hate speech in Chinatown is just the latest in a string of attacks geared towards the Asian and Asian-American community.

Across Philadelphia, incidents of hate and racist speech have drawn the attention of community advocates and police.

"We thought 2020 was sort of like an aberration in that things will calm down once the vaccine comes out and people get vaccinated, but at the beginning of 2021, it got worse," Chin said.

In response, young advocates with the grassroots group Philly Rally for Solidarity marched to City Hall to raise awareness and send a message about the increase in hate against marginalized communities.

"It made me think twice about going outside after dark or like made me really notice how people looked at me," said Sam Ding of Center City.

"This is not just isolated to the Asian community, this impacts the Brown, the Black communities as well as our LGBTQ communities, so we thought that it was so important to really stand up and bring awareness that a lot of us are hurting," said organizer Raquel Dang.

The group says their message is one of peace, unity, and strength.

Psychiatrist Dr. Krysti Vo has been hard at work bringing awareness to the spike in anti-Asian crimes during COVID-19 and advocating for tolerance and solidarity.