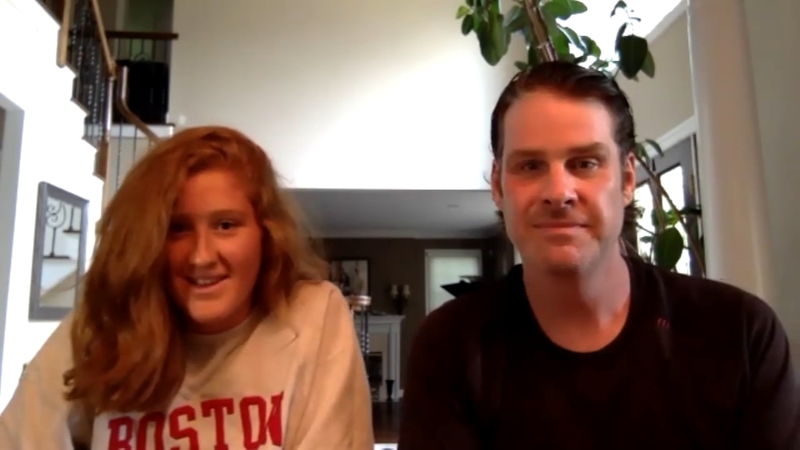 PHILADELPHIA (WPVI) -- Chris Therien played 11 years for the Philadelphia Flyers and now he's watching his three daughters light it up on the court.

All three will play division one basketball after Alexa Therien, a junior at Cherokee High School, announced she was going to Boston University.

Chris Therien jokes, "There's not one point of my athletic hockey-ness that translates to the basketball court."

Alexa jokes with 6abc sportscaster Jeff Skversky, "As he said, he doesn't know much about basketball. But he will pretend he does."

While hockey and basketball are much different, he has passed down keys to success as an athlete.

While Chris was not a basketball player, he played more games than any other Flyers defenseman in team history and his defensive mentality has rubbed off on his youngest daughter.

"If you see me on the court sometimes you see a girl bounce off me or I'll give her a little shove. People have told me I could be a hockey player just because of the way I play. It definitely rubs off on us a little bit," said Alexa.

That physicality could cause some family drama down the road.

Alexa will be competing against possibly both of her older sisters who play at Loyola, one of Boston University's rivals.

In fact, her sister Ava may have to guard her.

Ava Therien, the middle of Therien's daughters, says "I'd much rather have Alexa on my team then on the other team but I think it's going to be fun to be able to play against her. I know how she plays."

"It's definitely gonna be a good experience," Alexa chimes in.

Chris Therien, of course, is a proud father

"If you get to see your three daughters play a Division I sport on the same floor together for one game, I don't know if there's anything better you could look at as a parent. Wow that's pretty cool!" Therien says with excitement.

Before the college rivalry heats up, Alexa will finish her senior season at Cherokee HIgh in Marlton next year where she will try to lead them to their first state title.

A state title shot that was taken away this year when the season was shut down due to the pandemic.