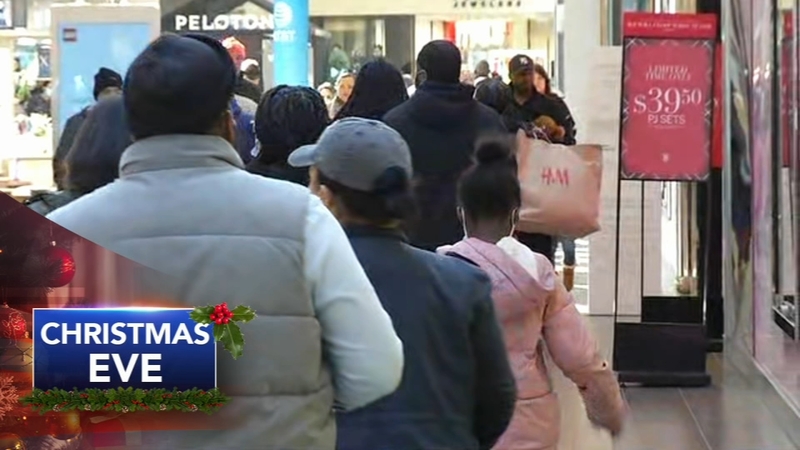 KING OF PRUSSIA, Pennsylvania (WPVI) -- Last-minute shoppers were out in full force on Christmas Eve, rushing to get gifts before the stores closed for the holiday.

"We procrastinated a little bit, but it's fine," said Kayla Wiley from Manayunk. She says she bought gifts for 20 family members in one outing in King of Prussia.

"It wasn't as bad as you think it would be on Christmas Eve. It was pretty spread out, and the store employees were really made sure everyone knew where everything was, and no one was fighting over anything," she said.

She's one of the thousands of shoppers who braved the Christmas Eve crowds throughout Pennsylvania, New Jersey, and Delaware.

Todd Putt, the director of marketing for King of Prussia Mall, said, "Some people really enjoy it. The sort of intensity of the last-minute shopping, but we're here to welcome everybody."

Some shoppers who preferred to check out small businesses shopped at the Reading Terminal Market in Philadelphia.

People there said they love how there are a lot of different vendors and food options.

"It's a one-stop-shop, and it's wonderful. It's great to come down to see the changes and see the vendors and everything," said Anne Canny from Drexel Hill.

Holiday cheer was also spotted at the Target in Wynnefield Heights, as people got their last-minute holiday shopping done.

"It's crowded. I think everybody is excited. I hear people saying, 'Happy holidays' to each other as they pass by in the aisles," said Genny Glassman from Narberth.

Some people waited till Friday because of their payday.

"That's when you get paid and get funds to do it," said Donna Marcus, from Germantown.

In Chestnut Hill, people made purchases at Serendipity with minutes to spare before the doors closed.

"I was just like thinking like I need one more present, so I just stopped by here," said Joe Filamor, from Chestnut Hill.

Employees at Green Street said business was better than this time last year when only 10 people were allowed in the store at a time.

"It's good because you know the engagement that we have we can share with each other it's pretty interesting," said Kayesha Willis, a sales associate at Green Street.

With COVID-19 on many people's minds, they purposely came out close to closing time at 5 p.m. at Kitchen Kapers.

"Trying to avoid the bigger crowds at the other stores, so very glad to have these here," said Sienna Robinson, from Chestnut Hill.

Big Lots in Clifton Heights stayed open till 10 p.m. for those who needed to make a late dash.

"It's nice that they were open, and I could get everything I need," said Marcus Hoston from West Philadelphia.

Some had to wait in line after online shopping didn't come through.

"I couldn't get what I needed offline, so I had to do a quick run to the store and buy what I needed," said Stephanie Robinson from Yeadon.