The latest happened around 9:00 p.m. when fire crews were called out to the Valley Run apartment complex on the unit block Butternut Court.

When they arrived they found the complex fully involved in flames.

The fire department struck three alarms while battling the blaze.

At least a three apartment buildings were destroyed.

No one was killed in this fire, but six families are out of their homes and some injuries were reported. A 79-year-old woman injured her back while being evacuated and a 28-year-old firefighter suffered a head injury. The firefighter was taken to the hospital and is in stable condition. A paramedic was also treated for a ankle injury.

The Red Cross is assisting 12 people who were unable to return home.

This fire is just three miles from an earlier fire that left one person dead and another seriously injured. 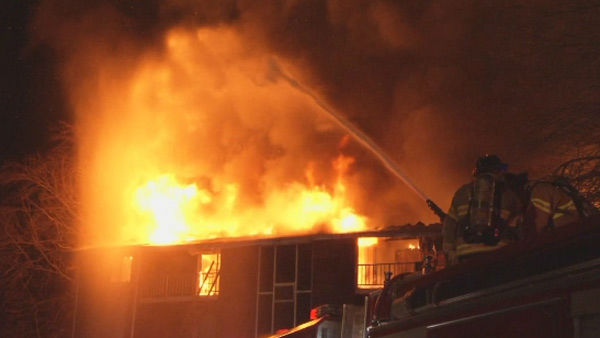 That fire broke out around 2:30 a.m. at the Harbor House apartments on the unit block of Harbor Drive.

Fire officials say the blaze began in a third floor apartment, spread to the attic and to the building next door.

Firefighters rescued a 72-year-old man who was trapped in his second floor apartment.

Paramedics on scene treated him for smoke inhalation and high carbon monoxide levels. He was taken to Christiana Hospital in serious condition.

One person was found dead in the fire.

17 apartments in total were damaged. Fire officials say there's at least $1 million worth of damage and the building will have to be torn down.

The Red Cross is offering assistance to 38 people who were left homeless.