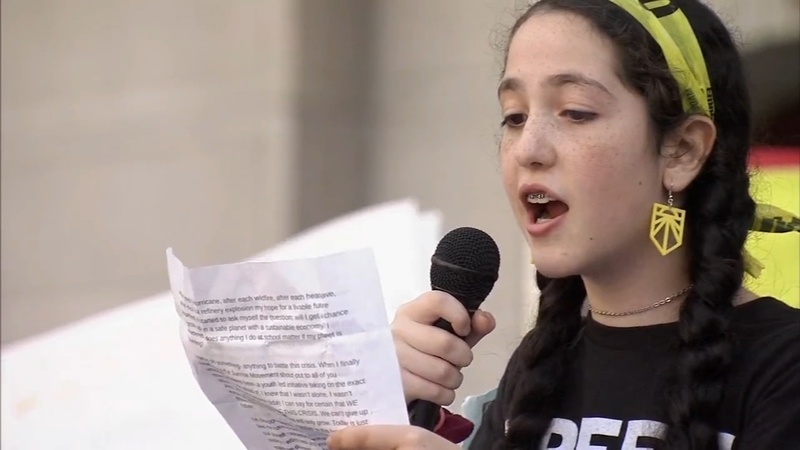 Millions of people will stay away from work or school in Philadelphia and across the world Friday to come together and demand that something must be done, now, on climate change.

Protests are planned throughout the day, including one at Philadelphia City Hall during lunchtime.

In Canberra and Kabul, Cape Town and Berlin, and across the globe, hundreds of thousands of people took the streets to demand that leaders tackle climate change in the run-up to a U.N. summit.

Many were children who skipped school to take part in the second "Global Climate Strike," following a similar event in March that drew large crowds.

Events kicked off in Australia, where protesters marched in 110 towns and cities, including Sydney and the national capital, Canberra. Demonstrators called for their country, the world's largest exporter of coal and liquid natural gas, to take more drastic action to reduce greenhouse gas emissions. 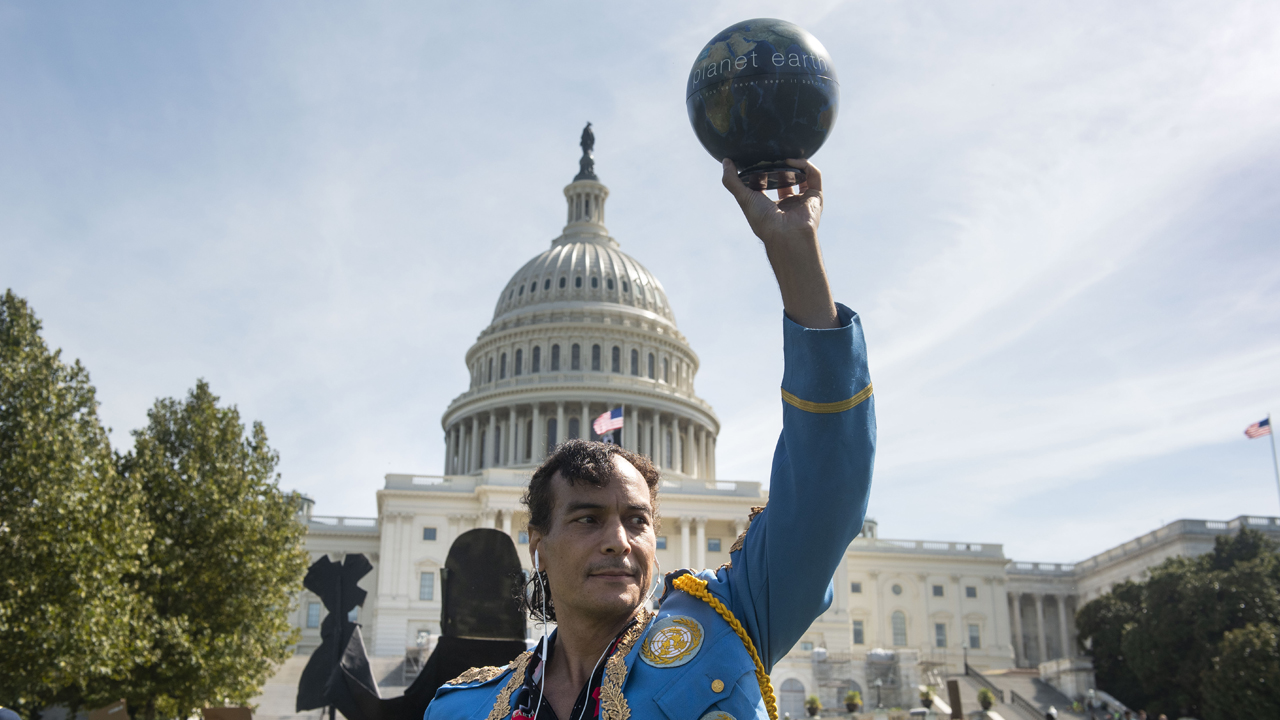 Quentin Dean holds a globe as he demonstrates at the march to the U.S. Capitol during the Climate Strike protest Friday, Sept. 20, 2019, in Washington. (AP Photo/Kevin Wolf)

"Even though we ourselves aren't sick, the planet which we live on is, and we are protesting and fighting for it," said Siobhan Sutton, a 15-year-old student at Perth Modern School.

Organizers estimate more than 300,000 protesters took to Australian streets in what would be the country's biggest demonstration since the Iraq War in 2003.

The protests are partly inspired by the activism of Swedish teenager Greta Thunberg, who has staged weekly demonstrations under the heading "Fridays for Future" over the past year, calling on world leaders to step up their efforts against climate change. Thunberg is expected to speak at the U.N. Climate Action Summit on Monday.

Hundreds of rallies took place across Europe, including in the Czech Republic, Germany, Britain and Poland, which is still widely coal-reliant and where many middle schools gave students the day off to enable them to participate in the rallies in Warsaw and other cities.

In Berlin, organizers said 80,000 people gathered in front of the capital's landmark Brandenburg Gate, not far from Chancellor Angela Merkel's office where the Cabinet was thrashing out the final details of a plan to curb Germany's greenhouse gas emissions .

In Helsinki, the Finnish capital, a man dressed as Santa Claus stood outside parliament holding a sign: "My house is on fire, my reindeer can't swim." 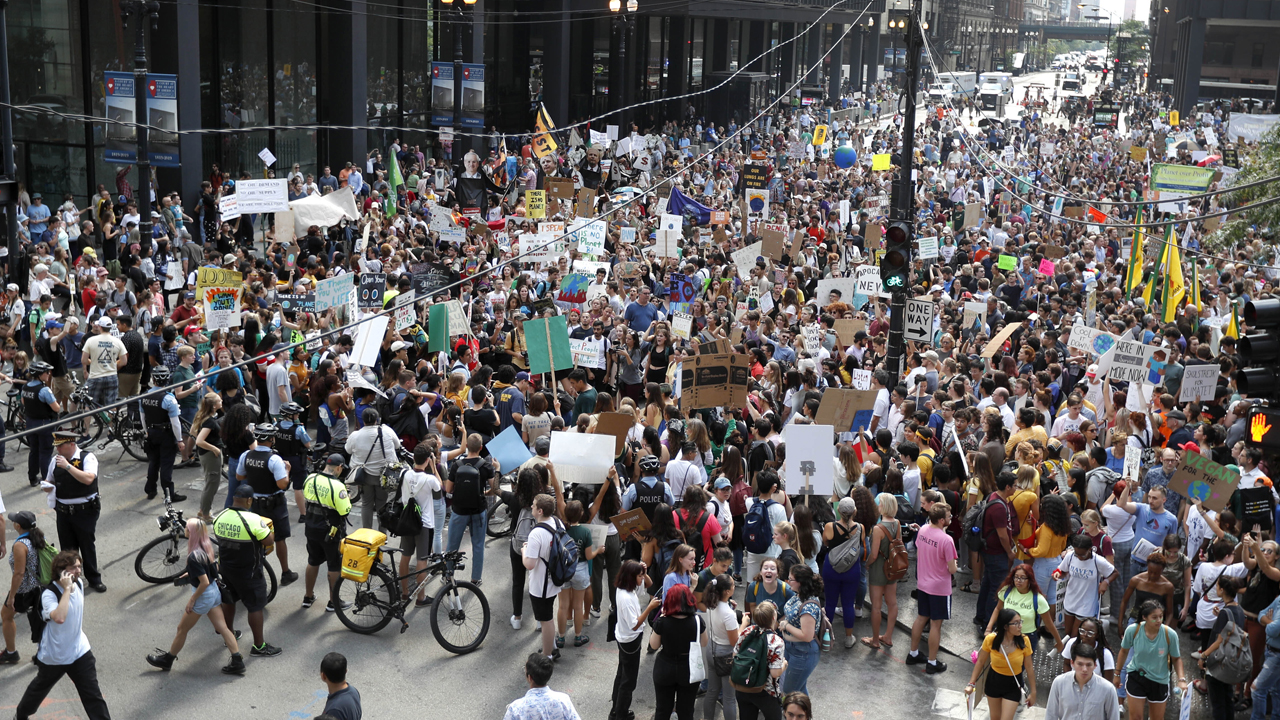 "We need to reclaim our constitutional right to clean air and water," said Aman Sharma, a 16-year-old protester in India's capital New Delhi.

In Tokyo, hundreds of students and environmental activists marched through the business and shopping district of Shibuya, chanting "Climate Justice!" while holding hand-painted placards made of cardboard with messages such as "Go Green," ''Save the Earth," and "the Earth is on fire."

Smaller rallies were held in more than a dozen cities around Japan, including Kyoto, the nation's ancient capital that hosted the 1997 climate conference.

In a quiet protest in Seoul, about two dozen environmental activists flashed messages in Morse code on LED flashlights, calling for action to rescue the earth.

In the Afghan capital, Kabul, an armored personnel carrier was deployed to protect about 100 young people as they marched, led by a group of several young women carrying a banner emblazoned with "Fridays for Future."

Fardeen Barakzai, one of the organizers and head of the local climate activist group, Oxygen, said "we want to do our part. We as the youth of our country know the problem of climate change. We know war can kill a group of people. ... The problem in Afghanistan is our leaders are fighting for power but the real power is in nature."

Rallies were also held in Johannesburg and the South African capital, Pretoria, as well as Kenya's capital, Nairobi, where some young protesters wore hats and outfits made from plastic bottles to emphasize the dangers of plastic waste, a major threat to both cities and oceans.

Climate change "is worse than homework," one sign proclaimed.

Experts say Africa is the most vulnerable continent to climate change and the least equipped to deal with it. Governments have pleaded for more support from the international community.

Further rallies were planned later Friday in the United States, where organizers say more than 800 events are expected.