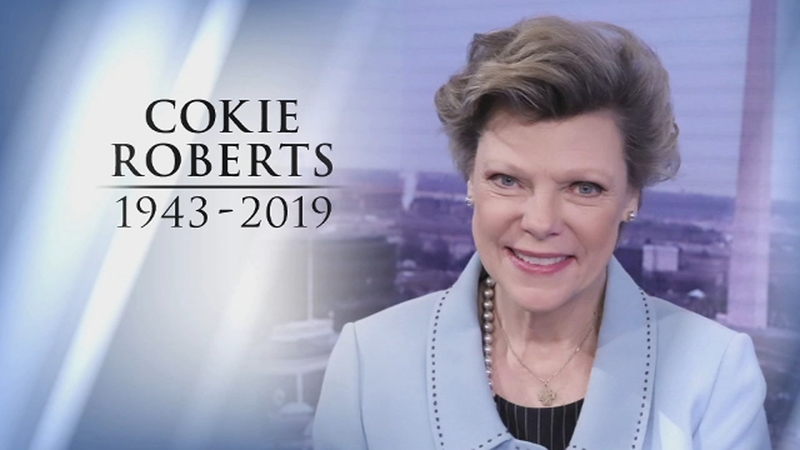 NEW YORK -- Legendary ABC News political journalist Cokie Roberts has died due to complications from breast cancer on Tuesday. She was 75 years old.

Cokie, whose full name was Mary Martha Corinne Morrison Claiborne Roberts, had a storied career over 40 years in television, public radio, and publishing. A true pioneer for women in journalism, Cokie was well-regarded for her insightful analysis of politics and policy in Washington, D.C., countless newsmaking interviews, and, notably, her unwavering support for the generations of young women - and men - who would follow her in her footsteps.

Born on December 27, 1943, Roberts was the daughter of longtime U.S. Representatives Hale Boggs and Lindy Boggs, who won her husband's seat when he died in a plane crash. Together they represented New Orleans for 46 years. Through them, Cokie got a front-row seat to politics.

In the 1970s, Cokie started in radio as a foreign correspondent for CBS, before moving to NPR to cover Capitol Hill in 1978. She would go on to become the congressional correspondent for NPR, where she would eventually split her time with ABC News. Cokie is perhaps the only reporter to have filed for Morning Edition, All Things Considered, World News Tonight and Nightline all in a single day.

She started at ABC in 1988 as a contributor for This Week with David Brinkley, appearing frequently on the roundtable. She was ABC's chief congressional analyst, anchored This Week with Sam Donaldson from 1996 to 2002 and was known as one of the smartest political commentators on television and radio for decades.

Cokie published six books, many of them best-sellers and most about women in American history, whose stories often had been overlooked. She won every major award in journalism and was recognized with over 30 honorary degrees.

Cokie was named one of the 50 greatest women in the history of broadcasting by the American Women in Radio and Television, and the Library of Congress declared her a "Living Legend" in 2008, making her one of the very few Americans ever honored.

She fought a public battle with breast cancer in 2002 and went on air -- wearing a wig. She did it proudly to inspire others.

Cokie is survived by her husband of 53 years, journalist, author and professor Steven Roberts, her two children Lee Roberts and Rebecca Roberts, her six grandchildren Regan, Hale and Cecilia Roberts and Claiborne, Jack and Roland Hartman, along with numerous nieces, nephews, and cousins.

"We will miss Cokie beyond measure, both for her contributions and for her love and kindness," her family said in a statement.

"We are deeply saddened that Cokie Roberts is no longer with us. She covered us for decades as a talented, tough, and fair reporter. We respected her drive and appreciated her humor. She became a friend. We know Steve, their children, and grandchildren are heartbroken. We send our sincere sympathies."

Other colleagues, political figures and celebrities took to Twitter to Cokie's death:

So sad to hear this. Bestselling author, Emmy award winner, and veteran journalist Cokie Roberts has died at the age of 75 due to complications from breast cancer. She was a pioneer for so many and will be sorely missed.💔#RIPCokieRoberts https://t.co/4UIk4pURm6

Our condolences to the family of my @ABC colleague Cokie Roberts. She was a staple of Sunday morning TV news for so long and a great example of loving our democracy and politics but also being an able critic of both. Mary Pat and I will both miss her good humor and kindness.

I am simply heartbroken by the loss of this extraordinary woman. But I am so grateful for Cokie Robert’s friendship and kindness and wisdom. There was no one better. pic.twitter.com/tqM1pd84BY

Whenever @CokieRoberts spoke, I LISTENED! Such a deep well of knowledge and history and analysis and humanity. A loss for the entire world.

The work of political journalists is critical to our democracy.

Cokie Roberts was a paragon of that work and a pioneer in her industry. Her voice will be missed.