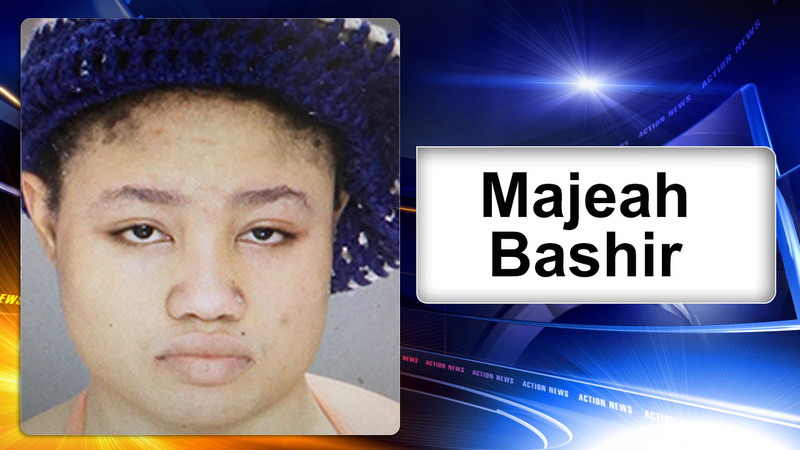 COLLINGDALE, Pa. (WPVI) -- An 8-year-old girl was seriously injured after police say a woman stabbed her in the head on Friday in Collingdale, Delaware County.

She is facing multiple charges, including criminal attempted homicide, simple assault, aggravated assault and reckless endangerment of another person.

A preliminary hearing has been set for Feb. 28.

Bashir had nothing to say Friday night, and all of sudden felt the need to cover her face after what police say she did.

"Sick! I don't care what you're arguing about, what you're fighting about. You got a baby in between you or a baby in the mix and you're gonna pull a butcher knife out," said Collingdale Police Chief Robert Adams.

It all began just before 4 p.m. Friday in the 500 block of MacDade Boulevard. An eerie, purplish light glowed from the second floor where the horrific chaos broke out. An argument between neighbors. Police say apparently the suspect was not happy with how her neighbor's daughter - the 8-year-old victim - was babysitting her toddler.

"There was some kind of confrontation over, I guess, her babysitting skills or whatever, and then an argument ensued," said Adams.

Police arrived on the scene to find a man holding the girl outside with a towel wrapped around her head.

"She had about a 4-inch gash in this area of the head. It's quite deep and quite wide," said Adams.

Officers rushed the child to Mercy Fitzgerald Hospital. She was ultimately transported to Children's Hospital of Philadelphia.

Neighbors who did not want to speak on camera say police were called to the suspect's apartment so many times in the past, they practically lived there. And recently they say she was chasing her boyfriend down the street with a hammer in the middle of a snowstorm.

Police had to pull neighbors and the victim's family away, who were trying to get their hands on the suspect.