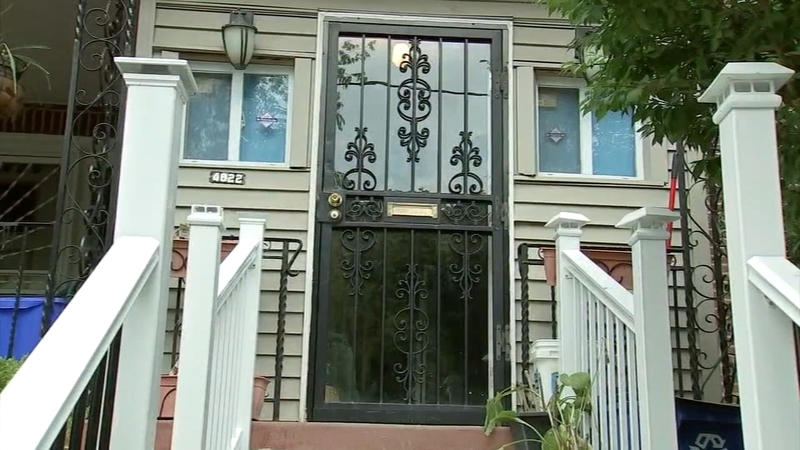 GERMANTOWN (WPVI) -- A man who apparently mistakenly thought his home was being broken into opened fire on Philadelphia police as they sought to serve an arrest warrant for his grandson, critically wounding one officer before he was killed by return fire, the police commissioner said.

A woman in the Germantown home was also shot.

"This is an all-out, absolute tragedy all the way around," Commissioner Richard Ross told reporters Monday afternoon.

It happened in the 4800 block of Knox Street on Monday morning.

Police say they repeatedly announced themselves, but 59-year-old Ricardo Giddings's family says they never heard anything except someone trying to break into the house.

That's when the gunfight erupted.

"My dad thought that someone was breaking in. So, he has a registered firearm and he did shoot," said Laquisha Johnson.

Chopper 6 over scene of officer injury in Germantown on Monday, August 6, 2018.

49-year-old Officer Jaison Potts was shot in the face. Ross said Potts walked into the hospital and was expected to survive, but was under heavy sedation because of his injuries and was scheduled for surgery Tuesday.

Police were at the home serving a weapons warrant for Johnson's 20-year-old nephew.

News conference on shooting of Philly police officer on August 6, 2018.

"My dad did not know that they were police officers and you gotta understand, they were on the second floor. My dad is sick," she said.

"We have three people who sustained significant injuries, one of them died," Ross said. "Sadly, our heartfelt condolences for them. I can't color it any other way. There's no attempt to justify."

Officials say the SWAT team announced their presence three times before entering the home that has two front doors separated by an enclosed patio.

See raw video from the Action Cam after a police officer was shot in the Germantown section of Philadelphia.

The 20-year-old suspect officers were initially looking for turned himself in to police late Monday afternoon. He was later released with no charges filed.

When asked if this could have avoided, Ross said: "I'm trying to figure how that could be. You always look for ways to do things better, but as of right now, as you ask that question, I'm trying to go through my mind what could have happened differently."

Potts is a 20-year veteran of the force. Philadelphia Mayor Jim Kenney said the married father of three was due to start a vacation on Monday.

The woman injured, Ross said, is actually the mother-in law of one of the department's own officers.