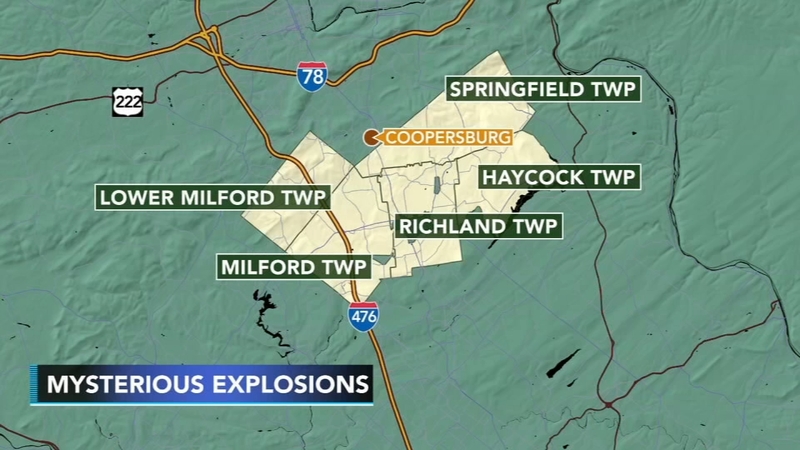 RICHLAND TWP., Pa. (WPVI) -- People who live in Upper Bucks County and lower Lehigh counties have been reporting hearing loud booms since April and feeling the ground shift early in the overnight hours.

Ficco describes some of the calls to his and other area departments have had over the last eight weeks.

"Definitely disconcerting. I would say unnerving to some people," he said.

The sounds come overnight, from midnight to 5 a.m.

Some witnesses describe a kind of thud, like vehicles slamming together. Others said the noise reminds them of underground blasting.

"I'm hearing like a firework kind of like sound," said Samantha Ritter of Milford Township. "I looked out the window thinking maybe neighbors setting off fireworks or something."

But that was not the case.

Donna Weaver said she has heard an explosion loud enough to startle her dog several times.

In Richland Township the chief says two of his officers heard the sound, one first seeing a flash.

"There was a flash of light and maybe several seconds before he heard the sound, and then the other officer who was further away heard the sound later than he did," he said. "They both thought it was coming from different directions."

Complaints have come from multiple communities that are miles apart.

The State Police are investigating and have asked the ATF and FBI to assist in the investigation.