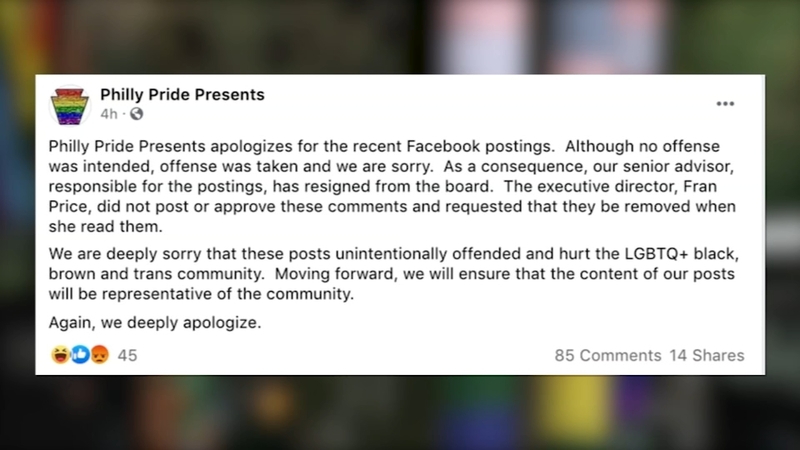 PHILADELPHIA (WPVI) -- The group responsible for putting on the Philadelphia LGBTQ+ pride events for nearly 30 years has disbanded amid backlash from the community.

"It's not just about celebration. It's also about raising awareness around the inequities that so many of us are suffering within this community," said Kendall Stephens, an LGBTQ+ civil rights advocate.

She says people who look like her have long felt marginalized by Philly Pride Presents.

The problems came to a tipping point last week when the group posted a description of the Stonewall Riots on Facebook, which made reference to "those dressed as women."

Stephens says the wording was transphobic.

"These were Black and brown trans women who helped kickstart the Stonewall Riots from which pride was birthed," she said.
With backlash building, the group posted an explanation, apologizing.

Within hours, it deleted the original post, then its Facebook page altogether. As of Tuesday, their phone lines were also disconnected.

Action News made several attempts to reach the organizers of Philly Pride Presents but has been unsuccessful.

The city's Office of LGBT Affairs said in a statement in part, "...We understand the community's need for a new vision of what LGBTQ+ Pride looks like here in Philadelphia."
"We are a city that thrives on its diversity. We put it in all of our advertising about what makes Philly so great, so it's time pride matches that same commitment to inclusion," said Jonathan Lovitz, a community activist.

Before Philly Pride Presents disbanded, community members had planned a protest against the group for Friday.

That gathering will still happen, but instead of a protest, it will be an opportunity for community members to begin reimagining pride.