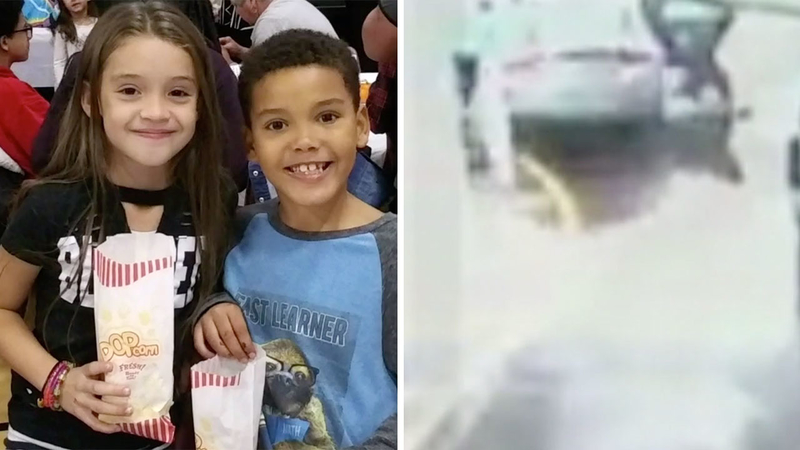 MIDDLETOWN, Ohio -- Two Ohio children managed to jump out of a moving car to escape an alleged carjacker as their grandmother tried to chase the driver down.

Police have released surveillance video of the harrowing encounter, which took place Thursday at a medical center outside Cincinnati. The footage shows the moving car's back passenger door swing open and the two children tumbling out into the street.

"I heard them screaming. I ran to the car, I ran to the driver side...because I knew my grandbabies were in that car," the grandmother, Nita Coburn, explained.

The 69-year-old told police she had left the car briefly to help a relative inside the medical center. That's when 24-year-old Dalvir Singh allegedly jumped in and sped off with the 8- and 10-year-old in the back seat.

"He sat down and started driving and kept saying, 'Get out, get out,' and I was trying to get her out," 8-year-old Chance Blue explained.

"My brother went to go grab me, opened the door and went out. My brother fell out, but the guy pulled me back in the car," 10-year-old Skylar Weaver recalled.

The quick-thinking little boy managed to open the door and pull his big sister out of the car as the suspect allegedly tried to hold her by her hoodie.

"What Chance did was extremely heroic," Middletown Ofc. Connor Kirby said. "It shows how much he loves his sister."

Coburn, meanwhile, hung onto the driver's door and was dragged for several feet before letting go.

"That car didn't bother me at all," she told WCPO. "It was the two babies. No one needs to feel that fear. No one does."