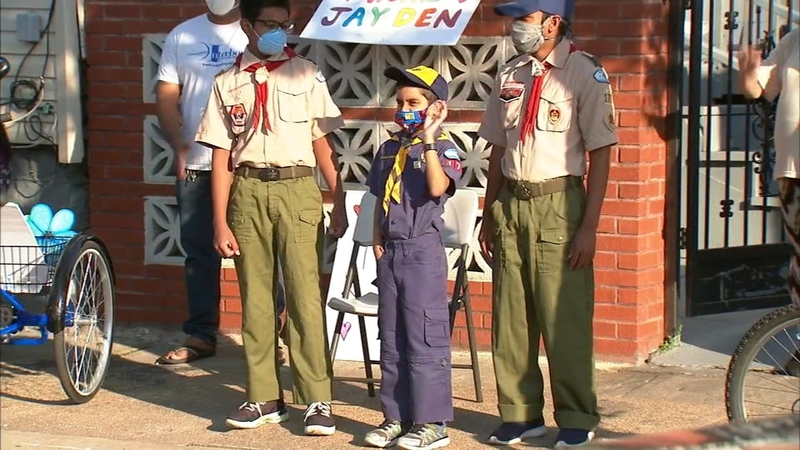 Parade held in NYC for boy who beat inflammatory illness

Just weeks ago, Hardowar was hospitalized, suffering from an alarming and mysterious disease known as Pediatric Multi-system Inflammatory Syndrome, believed to be somehow related to COVID-19.

Doctors said he has no neurological damage, but it impaired his speech. In the hospital, he couldn't talk at all.

Four days ago, Hardowar's father said he was answering only yes and no. And then by Thursday, he started speaking a little bit more.

The 8-year-old's case started with a fever.

He and all of his siblings are either Boy Scouts, Cub Scouts or Girl Scouts. Good thing they are, because his 15-year-old brother, Tyron, was there when Jayden's heart stopped.

"There was no pulse, so I decided we needed to do CPR to get him breathing and it helped," Tyron Hardowar said.

The 15-year-old said there were a lot thoughts going through his head but said he put them aside to help his brother.

According to an ABC News survey of hospital and state health officials nationwide, there are at least 220 confirmed or possible cases of the illness.

The majority are reported in New York, and more than a dozen are in New Jersey.

The unexplained syndrome, which experts say resembles toxic shock syndrome and Kawasaki disease, is believed to be extremely rare, but the numbers are expected to grow.

As for Jayden Hardowar, he still doesn't know what happened to him or how lucky he was that his brother was there. But one day he'll figure it out.