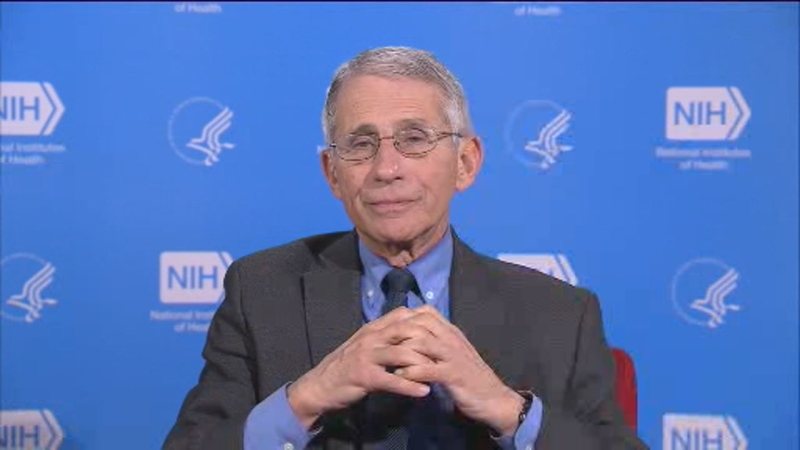 Dr. Anthony Fauci, the top infectious disease expert at the National Institutes of Health, says shutdowns and working from home could last up to "eight weeks or more" as COVID-19 cases continue to surge in the U.S.

Fauci made the assessment of what is still to come during an interview Friday with Good Morning America, saying the current state of crisis in the U.S. could last anywhere from two weeks to two months.

"I hope it's going to be in the earlier part, two, three, four weeks, but it's impossible to make an accurate prediction," Fauci said. "It's certainly going to get worse before it gets better."

Fauci said more tests would be available over the next week, but that officials should not wait before trying to mitigate the virus' effects.

"We're at a critical point now as we seek to blunt the rise in cases to make sure it's a hill, not a mountain,'' Fauci said.

Here's his full interview with ABC's Cecilia Vega on GMA:

CV: Joining us is Dr. Anthony Fauci. He's also on the president's coronavirus task force. Dr. Fauci, thank you so much for being with us at this critical time right now. I want to start with where we are exactly in this country at this moment. We are seeing school closures. We are seeing events canceled, a complete change in how we are all living our lives. How bad is this going to get before it gets better?

AF: Well, it's certainly going to get worse before it gets better, and the kinds of mitigation strategies, containment and mitigations that you are talking about is to do that kind of physical separation of people which is one of the very effective ways that you can really mitigate the spread of the virus. If you look at the pattern of viruses, particularly these types of viruses and even look at what's gone on in China and in Italy, and in South Korea, you go along like this, the way we were, and you have a big spike that goes way up, and then after awhile, after much disease and suffering and death, it comes back down again. The purpose of the mitigation is to get that blunted so it's a bit of a hill. We're getting there, more so than other countries, but in general, we'll hopefully make that blunting of that peak so we can save a lot of life and illness.

CV: To be clear, we have not peaked yet.

AF: No. There's no doubt we have not peaked yet.

CV: I think it's frightening for people to see what we're seeing in places like Italy and China. Are we working toward a gradual shutdown of our country here it a home?

AF: You know, it's very difficult to predict, Cecilia. I'm not sure we're going to get to that. I think that would be really rather dramatic, but I can tell you that all things are on the table. We just have to respond as things evolve over the days and the weeks.

CV: Dr. Fauci, if the most vulnerable group is the elderly right now, we're seeing these school closures around the country. Is that the right move for children and families?

AF: Well, I think it should be done in a proportionate way, and I think what's going on right now is generally an appropriate approach, but people need to understand that even though it's clear from our experience that children, young adults do very well for the most part. They are not the most vulnerable, but they do get infected and if they get infected and the school, the crowding of the school is a perfect place for that to happen, they may do well, but then they go home and there's grandma and grandpa or an uncle and aunt or a mother and father who actually have an underlying condition that will make them more vulnerable.

CV: You know, this testing is top of mind for so many of us right now, and you made some headlines with your very candid and blunt assessment of the state of testing. You said the system is failing at providing adequate testing when you testified before congress. Do you believe there are people walking around and have the virus and don't know it because of this lack of testing?

AF: I'm not so sure it's because of the lack of testing, but I think the system as it was designed, was designed for what it was designed for. Let's look ahead, and I believe what we're hearing at the task force that we are now getting into that phase where we'll be able to really scale it up a lot. I think in the next week or so, you're going to see an acceleration of availability of tests.

CV: Well, I want to get your take on the messaging from the white house right now because it was just yesterday that president trump himself said that frankly the testing has been, quote, very smooth. Are Americans getting mixed messages on this front? Is it accurate, Dr. Fauci, to say that the testing has been very smooth?

AF: Well, you know, I think again, I don't want to be getting involved in contradicting or not contradicting. Right now as I've mentioned many times and I'll stick by it, early on, the way the system was designed, as good a system as it was, it was not a design to approach that broad blanket testing. We're on our way to that now, and we'll be able to do it relatively soon.

CV: I'm sure you heard what Gavin Newsom is saying. Many of the testing kits they're receiving are missing key components. He's comparing these testing kits to printers without ink. Isn't that just unacceptable at this stage?

AF: That was unfortunate, and it's being corrected.

CV: I have to ask you about president trump and the photos of him standing next to the Brazilian official who tested positive. People bear in mind that if you have come into contact with someone who tested positive, you should be self-monitoring or in isolation getting tested. Should all those things apply to the president?

AF: You know, I leave that to the president's white house physician who is an extremely competent individual who I know well, and the decisions there were between what would be a potential patient and the physician. I'll leave that decision to them.

CV: If you came into contact with someone who tested positive, would you get tested?

CV: And finally, Dr. Fauci, as people are working from home today and we're seeing these shutdowns all over the country, what's your message? How long are we going to be living like this?

AF: It will be at least a matter of several weeks. It's unpredictable, but if you look at historically how these things work, it will likely be anywhere from a few weeks to up to eight weeks. I hope it's going to be in the earlier part, two, three, four weeks, but it's impossible to make an accurate prediction.

CV: Thank you so much for your time this morning.

AF: Great to be with you.

“It’s certainly going to get worse before it gets better.” NIH official Dr. Anthony Fauci says it could be up to “eight weeks or more” of shutdowns and working from home as COVID-19 cases continue to surge in the U.S. https://t.co/OSp7OkbziN pic.twitter.com/bS1IQiAy58