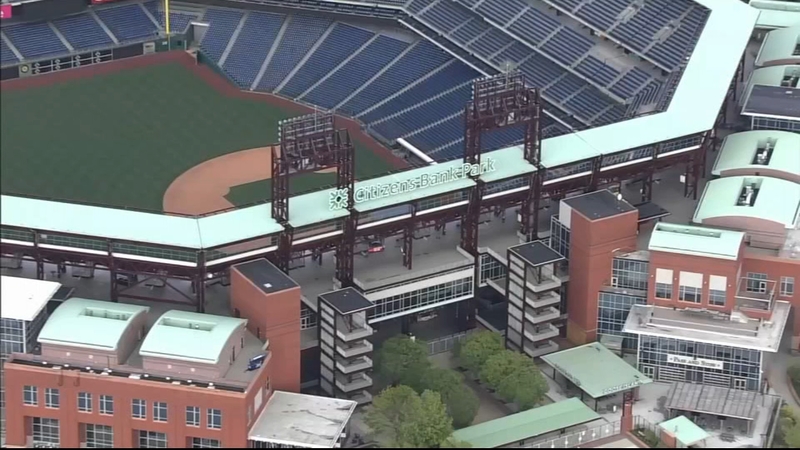 PHILADELPHIA (WPVI) -- After being on the outside looking in last year, Philadelphia Phillies fans may actually be able to walk into Citizens Bank Park for games, perhaps even by Opening Day on April 1 against the Atlanta Braves.

The team is still waiting for the Commonwealth of Pennsylvania to officially loosen restrictions. An announcement could come within the next few days.

"It would be huge. I know the energy would be infectious. I think everybody is hoping for that," Phillies starting pitcher Spencer Howard told 6abc sportscaster Jeff Skversky.

Howard, who was a rookie last season, is hoping his parents can finally see him pitch in the majors.

Phillies fans are crossing their fingers, too.

The infamous "Phandemic Krew" is the first group of Phillies fans to ever be honored with a bobblehead.

Brett MacMinn, who is apart of the Phillies fan club the "Phandemic Krew," is holding out hope he can walk through the gates this season instead of cheering from the outside of the ballpark, which he did last season

MacMinn, who still plans to be outside for spring training games starting Sunday, would love to have a seat come the regular season, and replace his cardboard cutout to cheer on his favorite team.

"It would mean a lot to us, there's a reason we gathered outside: it's our love of baseball," said MacMinn. "I'm ready to be back inside. I feel like it can be done safely and been done safely in other places."

The Phillies, Sixers and Flyers have all sent requests to the City of Philadelphia to have fans at their games, and there's a possibility fans could be allowed back at the Wells Fargo center sometime next month.

Citizens Bank Park could potentially go from cardboard cutouts we saw last season in the stands to a limited number of real people this year.

"They care they come to games. Whether it's booing or cheering, at the end of the day it's all love," Embiid said. "I always feel their presence."

The Wells Fargo Center recently underwent an $11 million renovation of their HVAC system to improve air quality and all three teams have plans for 100% mobile ticketing, as well as changes at games will be in effect to make it a safe environment, including social distancing.

"We did receive requests from the Sixers, Flyers and the Phillies. We are looking at our event limits. Right now large amounts of fans would not be allowed under event limits, but we are likely to ease that back somewhat, effective on March 1. I should point out though that there are event limits that the state has, and we cannot be less restrictive than what the state allows. All of those proposals would allow more people than what is currently allowed by the state. So I can't guarantee whether those requests will be granted, because it's not on my authority. It's up to the governor," Philadelphia Health Commissioner Thomas Farley said.

"I can't guarantee anything, but I can say it's likely that there would be some fans in the stands at the Phillies home opener. But how many will depend not only on us but also what the state decides," Farley said.

A decision by the governor and local leaders could be a huge indicator on the process of lifting restrictions in the future.

New Jersey Governor Phil Murph is now allowing a limited number of fans inside stadiums starting next week, which means the Devils will host games in North Jersey.

No guarantees but you would think Philadelphia and Pennsylvania will follow in the footsteps of New Jersey and New York as COVID-19 cases decline.