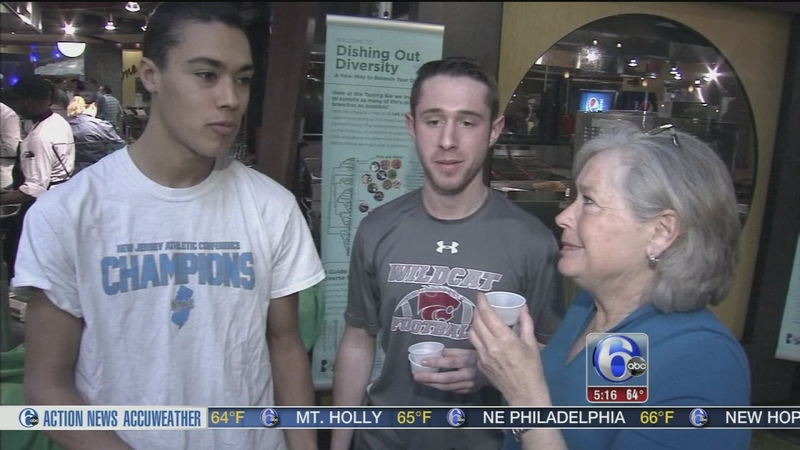 EWING, N.J. (WPVI) -- A New Jersey college gave students a new way to learn about the world around them, but it was not for those with a weak appetite.

Aleena Andrews was among hundreds of students and staff at the College of New Jersey who tasted crickets for the first time Tuesday.

"Kind of crunchy and I think that one was sour cream flavored, so, yeah, like potato chips," Andrews said.

"You could like feel the legs and the head as you crunch it so it wasn't very pleasant for me," student Eric Beyer said.

"The flavor is not off-putting, I must admit. It's actually pretty good. It's like eating popcorn," student Claudio Bizaro said.

The crickets were part of the college's "Tasting the Tree of Life" event, a fun and filling way to understand biodiversity and how it relates to food.

"We eat everything from animals to plants to fungi," Plant Evolutionary Biologist Wendy Clement said.

And each of the 149 different items on the menu reflected that.

"We wanted to produce a meal that had as many different kinds of organisms across the tree of life as possible," School of Science Dean Jeffery Osborn said.

Security Specialist Jack Fehn was knocking back his first ever crickets and some candied worm larvae, too.

"It exposes everybody to different things like I thought the crickets would be disgusting, but they were pretty good," Fehn said.

Normally, if you had bugs in the cafeteria everyone would freak out, but they were just part of what was on the menu to help students explore biodiversity through food.

"50% of the cells in our body are microbes so it's awesome to get to understand this stuff and to share the science with everyone," student Nisha Sanghani said.

The cafeteria staff worked hard to flavor the food, even the crickets.

"We thought that if we went with the potato chip flavor roasted cricket it might be a little easier going down," Executive Chef Lauren Franchetti said.

I know they are high in protein and I'm all for biodiversity, but in the end, I just couldn't swallow one of those crickets.

I'll leave that to the students, who are clearly less "bugged" by the idea.