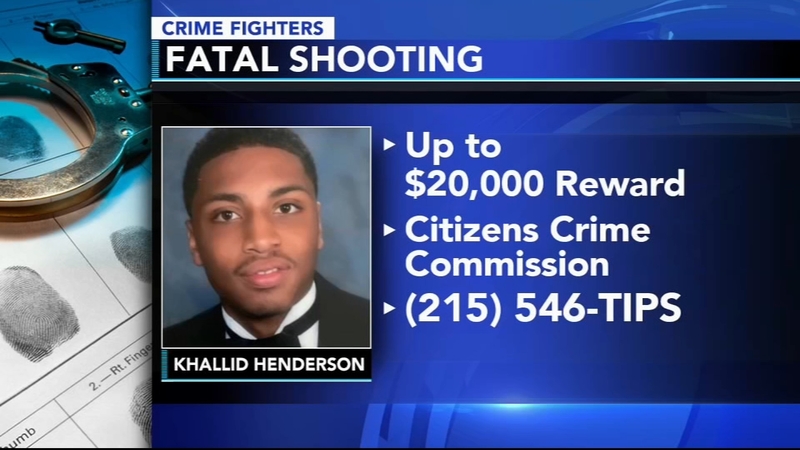 PHILADELPHIA (WPVI) -- A Philadelphia grandmother who lost her grandson to gun violence is making two pleas, one for help in solving the case and another to save the young people of her beloved city.

"He was a beast on the basketball court, like from birth, Khallid bounced a ball from birth," said Khalilah Moore with a smile on her face.

"He took that dirty ball with him everywhere he went," she said.

That is what he was doing on Wednesday, September 16, at Roberto Clemente Park in Philadelphia's Spring Garden section.

Police said three gunmen fired around 55 shots on to the crowded court.

Multiple shots hit Henderson, killing him. Police said the 21-year-old was the target, but his family can't understand why.

Moore says the message to city officials is simple: do something to curb gun violence.

"Why can't we get a handle on why our youth are dying in the streets of Philadelphia? Who are giving them the guns?" Moore asked.

She is just pleading for any kind of tip.

"Anyone knows anything like the jackets, the types of shoes they had or if they had gloves or a hat, whatever it is that you remember about these guys, please call the Crime Commission so we can get justice for Khallid," Moore said.
Report a correction or typo
Related topics:
philadelphiacrime fighterscrimemurderfatal shootinggun violence
Copyright © 2021 WPVI-TV. All Rights Reserved.
CRIME FIGHTERS
Crime Fighters: Who killed Ruth Anna Nobles?
Crime Fighters: Who killed Sha-Mir Gilmore?
Crime Fighters: Who killed Tyree Jenkins?
Crime Fighters: Who killed Daniel Singh?
TOP STORIES
Family of man killed outside of Pat's King of Steaks speaks out
Firefighter killed in I-76 crash ID'd; other first responders injured
Arrest made in 13-year-old murder in Frankford: Police
New legislation would require women to sign up for potential draft
Should vaccinated people mask up with COVID-19 cases rising?
Black car buyer's experience marred by dealer's 'racist' Facebook post
LeVar Burton taking over as 'Jeopardy!' guest host Monday
Show More
Police ID man charged with murder after shooting at Pat's Steaks
Strangers gift $60K to beloved airport piano player after viral video
AccuWeather: Turning More Humid Sunday
2 teens shot, 1 critical in Northeast Philly: Police
Search for bodies concludes at FL condo collapse site
More TOP STORIES News