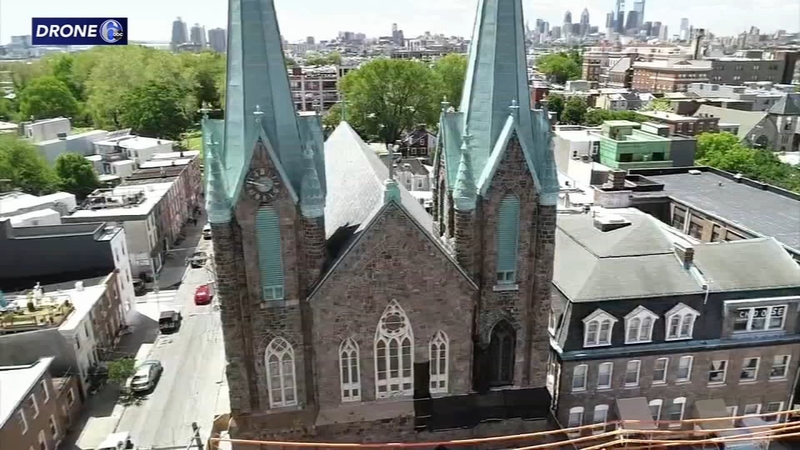 PHILADELPHIA (WPVI) -- Neighbors report that large stones once again fell from a historic church in the Fishtown section of Philadelphia on Monday.

This is the second time this year that large stones have tumbled down the facade of Saint Laurentius Catholic Church on the 1600 block of East Berks Street.

The 130-year-old church has been in disrepair for years now.

Back in March, Licensing and Inspection did determine that the facade will continue to fail.

Netting and scaffolding have been installed to contain the stones, as officials said some the stones have weighed close to 700 pounds.

"They should probably just fix it up, but for the safety of the school and everybody that walks by here," said Ryan Burns of Fishtown. "I think it should probably get fixed."

Around 1 a.m. Monday the stones began to fall again. Neighbors reported the issue to the fire department.
Upon arrival, fire officials said they discovered stones had fallen onto the scaffolding.

Licensing and Inspection was called and police taped off the area as a precaution.

Donna McKnight said she received an alert from the school early this morning.

"They need to do something with it," she said. "I'm off work today, thank God."

L&I will be coming out along with some engineers to further investigate the structural integrity of the church given what happened overnight.

Based on those results, school officials will then be able to determine when classes can resume.
Report a correction or typo
Related topics:
philadelphia newsphilly newschurch
Copyright © 2021 WPVI-TV. All Rights Reserved.
TOP STORIES
Police searching for four teens after home vandalized in Havertown
16-year-old charged with attempted homicide in Pa. mall shooting
1 dead in shooting at West Philly grocery store
Simmons tells 76ers he's not mentally ready to play: Sources
Teen shoots self in leg inside West Philadelphia school
Baldwin: 'My heart is broken' after accidental film set shooting
Rare bacteria found in Walmart room spray linked to 2 deaths
Show More
Halloween haunted houses: Check out some spooky local spots
Some are seeking solutions as violence continues in Philly
Man struck, killed by tractor-trailer in Hunting Park
Prop guns: What they are and how they can kill
Peter Scolari, 'Bosom Buddies' and 'Newhart' star, dies at 66
More TOP STORIES News