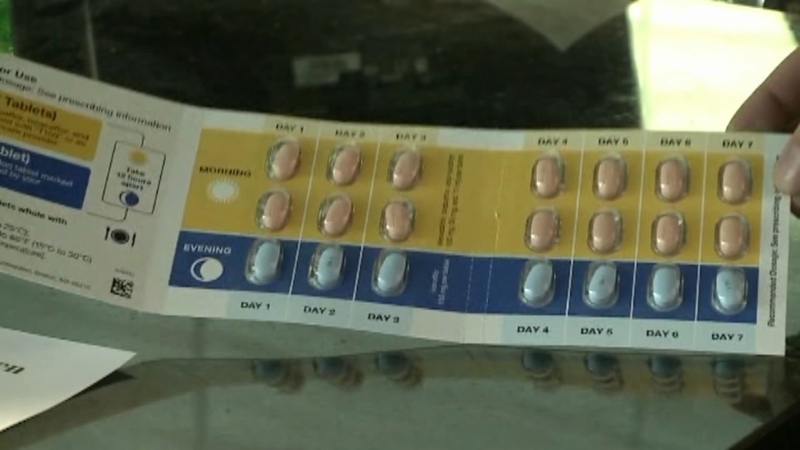 Newly approved drug bringing hope to those with cystic fibrosis

OMAHA, Nebraska (WPVI) -- A newly-approved drug is bringing hope to many people dealing with cystic fibrosis.

CF slowly robs patients of their breathing, choking lungs and other organs with thick mucus, killing many in their 30s.

The FDA fast-tracked the drug Trikafta because there have been so few drugs just for CF.

One man says it came just in time.

36-year-old Nicholas Bell has struggled with cystic fibrosis since he was a child, but the impact of the progressive disorder really hit this summer.

"About June or July this year, my doctors pulled my wife and all the nurses into a room and said 'we should start fundraising for a lung transplant," says Bell.

Bell was hoping for a miracle. He says he got it in the drug Trikafta, which was just approved by the FDA in late October.

It works on each cell to treat C-F, blocking the thick mucus that builds up.

"I would say it's the most exciting thing really ever to happen in CF because of the magnitude of change and the number of patients that are affected," says Dr. Peter Murphy, of UNMC and Nebraska Medicine.

"The changes that I experienced from the beginning of the drug, just two weeks in were - overnight. I mean - I literally felt it within hours," says Bell.

He's coughing less, taking deeper breaths, and can now jog on a treadmill.

"It's like I've got this new car and I want to go drive it all the time, except it's my body and I'm able to do these things that I once did before and lost the ability to do," he says.

About 90% of CF patients can take Trikafta.

It's not approved for children under the age of 12, because it's safety and effectiveness haven't been tested in them yet.