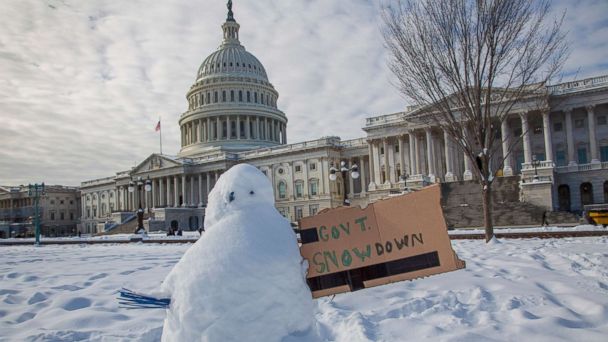 ABCNews
By CHEYENNE HASLETT
All 800,000 federal workers ensnared in the longest-ever government shutdown have officially missed a paycheck as of Wednesday, Day 26 of the political standoff.

Meanwhile, thousands of those same employees have been called back to work without pay because of the risks posed for their agencies if, for example, airports continue to run with fewer aviation safety inspectors or the IRS heads into tax season down almost 60 percent of its workforce.

And amid the changes being weathered by federal workers and other Americans affected, the White House is confirming that the that the projected economic impact of the shutdown on the U.S. economy may be double what was expected, according to estimates by White House economists.

On the political front, no high-level talks are scheduled in the stalemate over President Donald Trump's demand for billions in funding for the wall that Democrats refuse to agree to.

Here's a look at the effects.

During the chaos of government shutdown, Trump's nominee to replace Pruitt at EPA faces Senate questioning

As much of the energy in Washington is focused on the fight over the president's border wall and impact of the partial government shutdown, President Donald Trump's nominee to take over the federal agency charged with protecting human health and the environment is scheduled for a crucial hearing.

Andrew Wheeler took over the helm of Environmental Protection Agency in July after Scott Pruitt, the previous administrator, resigned amid increasing ethical questions and controversy. Wheeler has been working as acting administrator for several months.

Democrats on the committee, led by Ranking Member Sen. Tom Carper of Delaware, have raised concerns that EPA employees are struggling without pay during the shutdown and that important environmental enforcement is on hold while they're not at work. Carper has also raised concerns that Republicans are trying to rush the nomination by having the hearing during the shutdown.

IRS declares half of its workers are needed to process 2019 tax returns and refunds; warns of long wait times and limited assistance

The IRS will require some 46,000 employees to work without pay throughout the upcoming tax season to ensure returns are processed and refunds are mailed, the agency announced Tuesday in an updated plan for the government shutdown. That represents almost 60 percent of its 80,000-person workforce.

And while the IRS will be adding staff to answer some questions via telephone "in the coming days," the agency said, it's warning Americans to expect "heavier call volume" and "longer wait times." Walk-in assistance centers also will remain closed, including those offices intended to help people who are victims of identity theft and are required to visit an IRS office to establish their identity.

What will remain in effect is the requirement that people pay their taxes on time, although the agency said it won't conduct any audits during the spending lapse.

Working for the Coast Guard was always Albert Waterford Jr.'s dream job. The disabled veteran enlisted for two decades and, after his retirement, went back to work for the service as a civilian. His wife, Kate Wells Waterford, is a small business owner who trains horses. For those in the Coast Guard, the furlough has affected them differently because service members in other branches of the U.S. military fall under the Defense Department, for which funding has been approved.

The Waterfords hoped to receive their normal three paychecks this week: one for Albert's retirement from the Coast Guard, one for his job as a civilian and an additional check for his disability from the Veterans Affairs. But because of the shutdown, the couple has started a "furlough sale" to supplement lost income -- selling saddles, halters, bridles and items on social media.

"I called it a furlough [sale] because it is more of an urgency now," Kate Waterford said. "It's really made us re-evaluate our whole lives."

A federal judge on Tuesday denied requests from unions representing air traffic controllers and other employees required to work through the government shutdown that they either be paid or have the option to skip work while missing paychecks.

U.S. District Judge Richard Leon ruled to keep the status quo, saying that an order allowing employees considered essential to skip work would be "chaotic" in a best-case scenario and "catastrophic" at worst.

Lawyers representing the National Air Traffic Controllers Association had sued the Trump administration to get their controllers, thousands of whom continue to work and just missed a paycheck, be paid while working during the shutdown in order for them to remain "laser-focused" on their job guiding more than 40,000 flights through the nation's airspace every day.