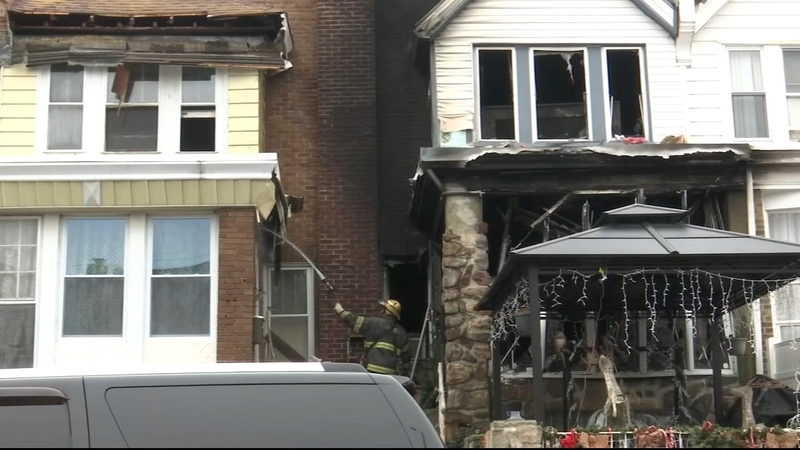 PHILADELPHIA (WPVI) -- Two adults died and one teenager was critically injured after an early morning fire in the West Oak Lane section of Philadelphia.
Firefighters were called just before 5 a.m. Saturday to the the 6700 block of North 17th Street for the report of a house fire and people trapped inside.

They quickly went to work battling the fire on the first floor while other firefighters began putting up ground ladders to reach the occupants upstairs.

Firefighters pulled three people out of the burning building.

Officials said a 64-year-old woman was pronounced dead at the scene.
A 74-year-old man was taken to Einstein Medical Center and died a short time later.

A heartbreaking morning in West Oak Lane, despite incredible firefighting, rescue efforts and EMS care. Please keep the community and our members in your thoughts. pic.twitter.com/m06EMJawZv

A 17-year-old girl was taken to Einstein then transferred to the Temple Burn Center in critical condition.

The fire was placed under control around 5:10 a.m.

"We're here with all the folks, the family, all the folks in the neighborhood, really just a tragic, tragic incident," said Philadelphia Fire Department Commissioner Adam Thiel.

It's one of the dozens of fatal fires the department has fought this year.

Officials say 32 people have died in house fires in the city in 2020.

That's on pace to match last year's total of 38, which the department says was the worst year for fatal fires in over a decade.

"It's been a little more this year than any other year that I ever saw, and it gets worse at times. This is one of the worst I've ever seen," said Anthony Viglianese of Worldwide Restoration.

Viglianese helps restore people's homes after disasters and believes the stress of this year and the pandemic has made it difficult for a lot of people to stay on top of their homes.

"I can only imagine losing somewhere where I grew up, where I have the memories of Thanksgivings and Christmases, things you don't get back," he said.