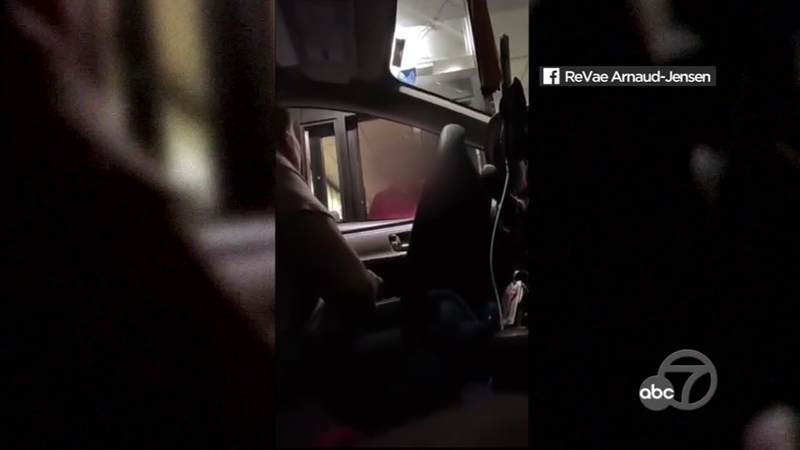 CAMPBELL, California (WPVI) -- ReVae Arnaud-Jensen is not a confrontational woman. She describes herself as a hardworking, responsible, single mother of three.

But when she tried to order at a Jack in the Box in Campbell, California on August 31 and the man behind the counter refused her service, she knew she had to stand her ground. She posted video of the encounter on Facebook.

Arnaud-Jensen is was born profoundly deaf and has no hearing at all. While she can read lips, she could not hear the voice over the speaker.

When she proceeded to the next window to explain, the employee was angry that she was not responding. She stayed for two hours and never got her order.

"I was just fed up, the constant, you know, telling us to go, to go, when it should be equal access," she said.

There are approximately 40 million people who are deaf or hard of hearing in the United States. Arnaud-Jensen says she is fighting for the entire community. It's one of the reasons why she posted the video on Facebook.

Arnaud-Jensen says she spoke to the manager of the store and was told the employee was fired. But she is standing her ground and even pursuing legal action.

"Things done to us, not okay, I will stand and fight for that, for everyone in the community. It's for you guys, the community, not me but for them, so there will be no more suffering for the deaf community," she said.

She says this kind of discrimination happens to her almost every day and it needs to stop. Arnaud-Jensen says she is demanding, at the very least, that Jack In The Box train their employees, including the CEO, to understand deaf culture.

KGO-TV reached out to Jack in the Box. In a statement, they sent this response :

"We have been informed of the incident that took place between an employee and hearing-impaired guest, in the drive-thru at a Campbell, CA restaurant on August 31st. We do not tolerate the mistreatment of any customers and expect employees to follow all training procedures, be respectful, courteous and accommodating to all guests. After a thorough investigation of the incident and direct contact with the local franchise owner, we understand the employee in the video has been terminated."
Report a correction or typo
Related topics:
societycaliforniaviral videodeaffast food restaurantviral
Copyright © 2022 WPVI-TV. All Rights Reserved.
TOP STORIES
Brian Laundrie confession letter released: 'I ended her life'
Norway terror alert raised after deadly mass shooting
Strike at 3 local beer distributors ends with new contract agreement
Protesters gather in Philly after Supreme Court overturns Roe v. Wade
Woman dead, man wounded after Kensington shooting
Pemberton Twp. residents told to boil water before use
1 dead after head-on crash near Pa. Turnpike service plaza
Show More
Biden signs landmark gun measure, says 'lives will be saved'
AccuWeather: Mostly Sunny, Hot This Weekend
5 local animal shelters team up for 'mega' adoption event
New Virtua Health practice to be safe space for LGBTQ+ community
How does overturning Roe v. Wade impact women in Pa., NJ and Del.?
More TOP STORIES News