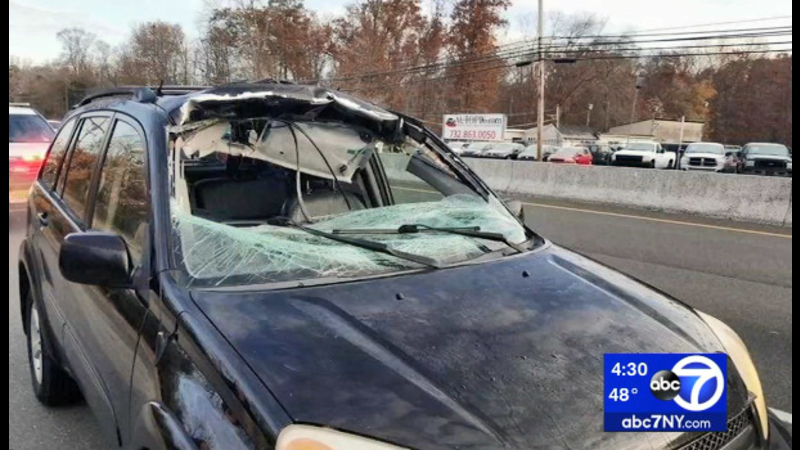 Deer crashes through woman's windshield on Rt. 9 in Howell Township

HOWELL TOWNSHIP, N.J. -- Police in New Jersey are praising a motorist for keeping her cool after a deer came crashing through her windshield while she was driving down a busy highway.

It happened Monday morning on Route 9 in Howell Township.

Police say 36-year-old Melissa Misthal was driving in the southbound lanes when a deer leapt in front of her 2004 Toyota RAV4 and came crashing through the passenger side.

The impact collapsed the windshield and part of the roof of the SUV. The deer was killed instantly and ended up in the back seat.

"Five minutes into my commute, the next thing I know there is a deer in my face," Misthal said. "My windshield collapsed on me, I got out, another commuter came and made sure I was OK."

Howell Township police say, despite the harrowing circumstances, Misthal kept her composure and managed to pull the vehicle over, coming to a safe stop on the shoulder of the highway.

She was treated at the scene for a minor injury.

"Looking at the size of that animal...I don't know how I'm not more seriously injured, I'm so grateful," Misthal said.
Authorities praised the Howell Township resident, saying in a statement, "This had the potential of being deadly not only for her, but for other motorists as well. She did everything right."

They urged all motorists to remain alert during this time of year, when deer are particularly active.