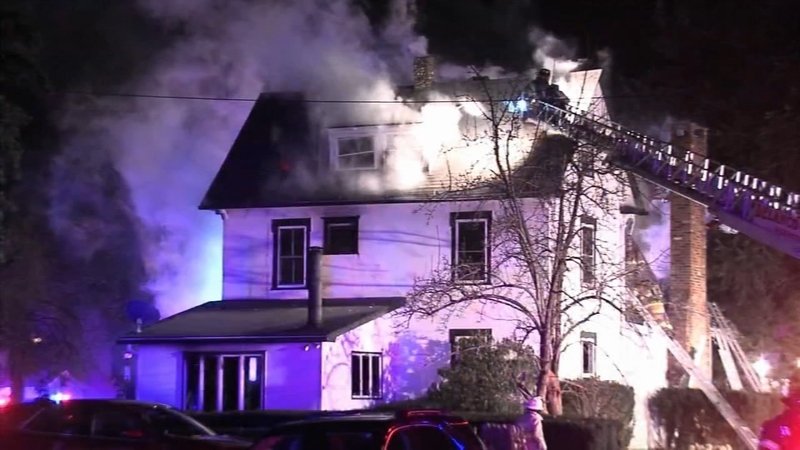 They worked quickly to rescue two women who were trapped on the roof and a man who was also in the home.

Firefighters put out Fast moving fire in Delanco that broke out at 1a. 2 residents rescued from rooftop. Several pets picked up by animal control. All three occupants and one firefighters have been hospitalized for unknown injuries. Crews working on hot spots. @6abc pic.twitter.com/Oajz97HNVs

As the fire quickly spread to the second floor, a second alarm was sounded.

"I got a slamming knock on my girlfriend's door by the neighbor," Marcus Miraglia told Action News.

Marcus lives at the home that burned, but happened to be staying at his girlfriend's place when the fire erupted.

His stepfather, mother and sister were sound asleep but woke up just in the nick of time.

His stepfather ran outside, the two women headed to the roof of the home.

Firefighters arrived and rescued them quickly despite the raging flames and slippery conditions.

"A big factor for us is ice," said Delanco Fire Chief Todd Johnson. "Water and cold don't mix well. Now we have slippage and everything else."

Public works crews were called in to salt the area so firefighters could continue working to bring the blaze under control.

All three occupants were briefly hospitalized for minor injuries as well as a firefighter.

The family dogs were rescued from the home but all three died hours later.

"She was so diligent with saving all of the memories and photos, everything," Marcus said of his mother. "That's probably going to be the worst. Material things come and go. But to me, my family is okay that's all that matters."

By noon Friday, all of the injured occupants had been released from the hospital.

The cause of the fire remained under investigation, but relatives told Action News they believe it may have started in the kitchen.