8 teens arrested in connection with carjackings, assaults in Delaware 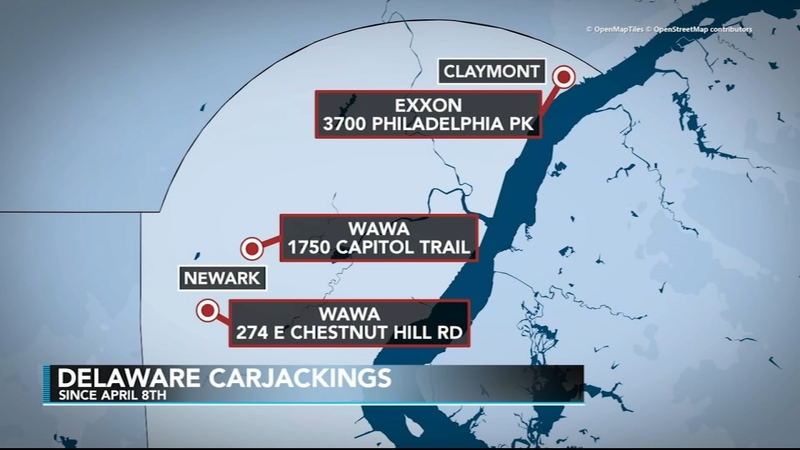 8 teens arrested in connection with carjackings, assaults in Delaware

NEWARK, Delaware (WPVI) -- Delaware State Police have announced that eight teenagers have been arrested in connection with several carjackings and violent attacks in the First State.

Delaware State Police said a 16-year-old girl carjacked a man on Sunday in a Wawa parking lot located on the 1700 block of Capitol Trail in Newark.

Police said the 22-year-old man walked into the store while leaving his 2018 Volkswagen Jetta unlocked and unattended. When he came out, police said a 16-year-old girl was hiding in the back seat. She then pulled out a handgun and told the man to drive, eventually ordering him out of the car, said police. The man was not injured.

Then on Monday Monday, police said, the man returned to the Wawa and saw the girl who stole his car in the parking lot. He called police and she was later arrested.

Troopers found the man's car in the area where the suspect lives.

On April 8, in an unrelated case, police said a 16-year-old boy and a 15-year-old girl stole the car keys to a female customer's vehicle at the Wawa located on East Chestnut Hill Road in Newark.

The victim was assaulted in front of the store before the suspects took off with the vehicle.


On April 9, police said two 16-year-old boys stole the car keys to a female customer's black Dodge Challenger at the Exxon located on the 3700 block of Philadelphia Pike in Claymont.

The victim tried to chase after the suspect, but was assaulted before the teens made off with the vehicle.

On April 13, police said two 16-year-old boys attempted to steal merchandise from a Wawa located at 3601 Wrangle Hill Road in Bear. The store clerk was assaulted when he confronted the teens, according to investigators.

On April 16, troopers discovered the stolen Dodge Challenger from the Philadelphia Pike carjacking and conducted a traffic stop.