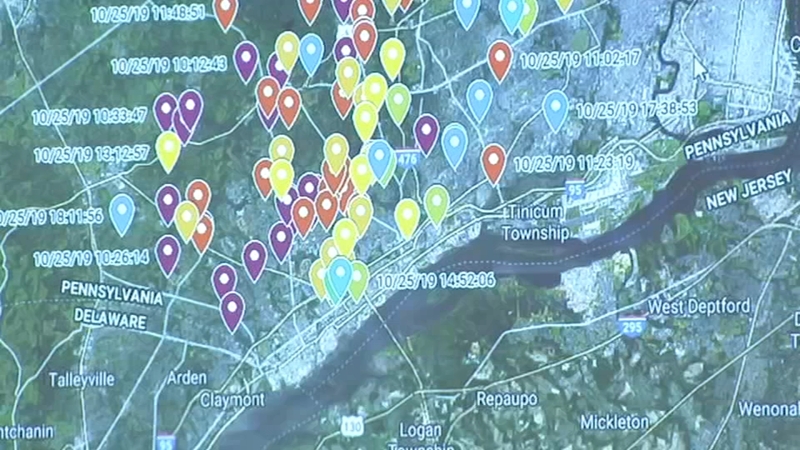 MEDIA, Pennsylvania (WPVI) -- A mysterious odor that's been detected in parts of Delaware County...continues to concern residents there.

But, investigators believe they're getting close to identifying where the sickening smell is coming from.

In the first meeting of the newly formed Delaware County task force aimed at identifying the mysterious odor, authorities have now determined but not named, two potential sources in the investigation.
Federal agencies including the National Weather Service have now joined state, county and local agencies in trying to identify the culprit.

The 30 agencies from Delaware, Bucks, Chester, Montgomery and Philadelphia counties have now been joined by New Castle County, Delaware in the response and investigation of the mysterious foul odor.

"We're in a better position to respond and I think it's going to increase our capabilities in the region if there was a release anywhere in the five-county or six-county area, we're gonna be better prepared," said Delaware County Emergency Services Director Timothy Boyce.

Officials originally thought the source of the foul odor, believed to be petroleum-based product, was coming from a five-mile stretch along the Delaware River from Tinicum to Marcus Hook. An area that is home to a number of industries.

New information coming from the National Weather Service in terms of wind direction amd other factors has caused them to expand the area. They now have two suspected sources for the odor but they are not yet identifying them.

"We talked about this being along the river, we're still focused on those most likely being the points of origin but as you know, Delaware County borders New Castle, Delaware and New Jersey and that's what we're looking at right now," said Boyce.

A big part of Tuesday's discussion centered on getting $10,000 portable air pollution detectors to first responders to help identify the odor.
"We have a wide array of meters and technology that could read down to the parts per billion range," said Delaware County Hazmat Official Bob Marchisello.

"If we can get the readings that'll help us kind of narrow down the sources," said John Paul Shirley, a member of the response team.

And then there is the public's role in all of this which officials say cannot be underestimated.

"If you see something, say something. If there's someone cutting drums or someone dumping product, or abandoning something, that would be the illegal environmental crime that we'd go after," said Boyce.